A book of poetry by M. Vasalis, illustrated by Cees Bantzinger

Parken en woestijnen, the first book of poetry by the Dutch poet M. Vasalis, appeared in 1940, and immediately received positive reviews. The Maatschappij der Nederlandsche Letterkunde (Society of Dutch Literature) awarded the book the Van der Hoogt-prize on June 7th, 1941. In October 1941 the seventh print was published, which made the total of sold copies 4800. Those interested in an illustrated version, could order a copy with original fine pen drawings or watercolours by the artist C.A.B. (Cees Bantzinger). How many of such copies he has illustrated is unknown. We do know, however, that the Dutch author W.F. Hermans owned one.

For the collections of the Society just mentioned, Leiden University Library has managed to obtain a copy with the original illustrations, making Leiden the only public library in the Netherlands that owns such an edition. This Leiden copy (shelfnumer 21182 D 12) counts twelve pen drawings, of which one is also coloured by the artist. The title of the adjoining poem refers to the title of a painting by Paul Gauguin from 1891, a portrait of a woman from Tahiti, nowadays in the Ny Carlsberg Glyptotek in Copenhagen.

By illustrating books in their own hand, those artists who refused to subscribe to the ‘Kulturkammer’ (the union founded by the Nazi occupier of the Netherlands which all active artists were forced to join) and who, for that reason were not allowed to practice their jobs, could gain some money in an illegal way. The drawings of Bantzinger did not please the author, however: she believed they generally did not fit her poems, presumably because her own memoires and impressions behind the verses were stronger than the interpretations of the artist.

In her poem Vasalis describes what she sees on the painting by Gauguin: a seated woman, with her hands resting in her lap, and holding "a flower between her fingers", and then continues to express the thoughts of the portrayed (and of her self). Bantzinger illustrates this poem, but neglects the greater part of its meaning. He puts the flower in the hair of the (standing) woman and shows her half undressed. The inward-looking contemplation of Gauguin’s woman is contrasted by Vasalis with the woman’s presumed inner stirrings. Bantzinger neglects this internalization and with his erotic depiction presents his own interpretation of the poem.

We would like to be in contact with private owners who possess an illustrated copy of this or another edition, in order to compare the drawings in different copies. 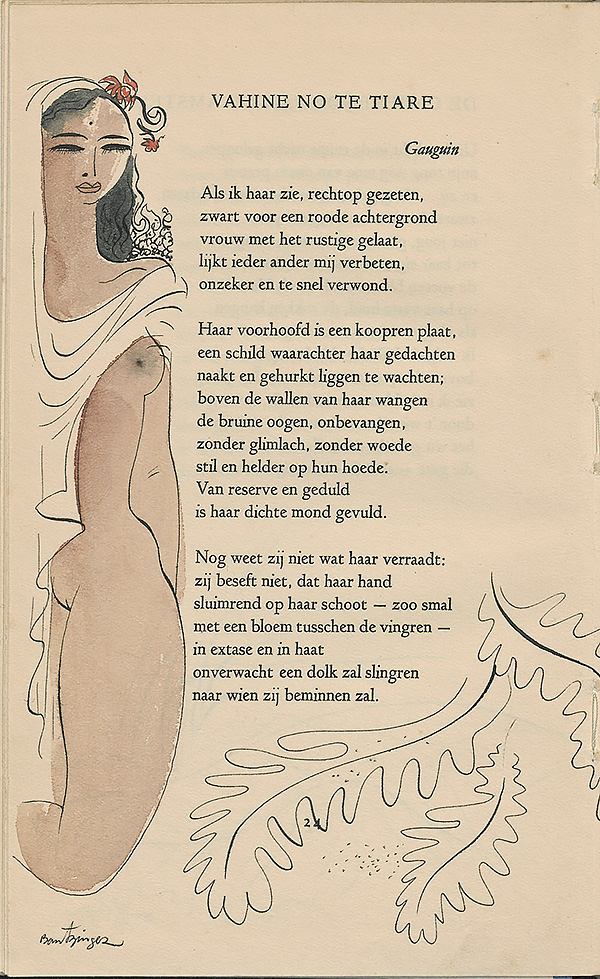