Walls of the settlement at Bimilipatnam collapsed due to disastrous construction. VOC authorities were furious.

In 1756 the Dutch East India Company (VOC) tasked military engineer Coenraad Pieter Keller to survey the village of Bimilipatnam. Depictions of this rather obscure trading post in the Dutch chain of settlements at the Coromandel Coast are scarce. The plans of a projected fortress and the immediate surroundings of Bimilipatnam – part of the Bodel Nijenhuis map collection – are therefore unique in the VOC cartography. The engineer, however, came to regret his involvement with the project as the poor construction would haunt him years afterwards.

The village of Bimilipatnam, nowadays known as Bheemunipatnam in the Indian state of Andhra Pradesh, served mainly as rice supplier and safe harbour for the VOC. During the dangerous monsoon season, Company ships could safely anchor before the coast.

The village was terrorized in 1754 by Maratha troops. The Dutch lodge, first mentioned in records around 1650, was looted and burnt down. VOC authorities seriously considered a permanent retreat from the village until the local Mughal regent, fearing a collapse of the local economy, eventually allowed the Dutch to construct a fortress to better protect their commercial interests in the region. C.P. Keller was tasked with making plans for its construction.

The first map (COLLBN 002-09-034) covers the village and its immediate surroundings. What makes this map remarkable are the rich annotations, both written in the extended index as well as on the map. Keller put much effort in it. The projected fortress is drawn in over the existing situation. It is immediately clear how this fortress impacted the infrastructure of the village. Many houses and even a Hindu temple would have to be demolished. C.P. Keller displayed expertise and knowledge of the local terrain by locating sites where corpses were ceremoniously burnt, water wells for the different religious groups and a temple which also functioned as lighthouse for the ships. 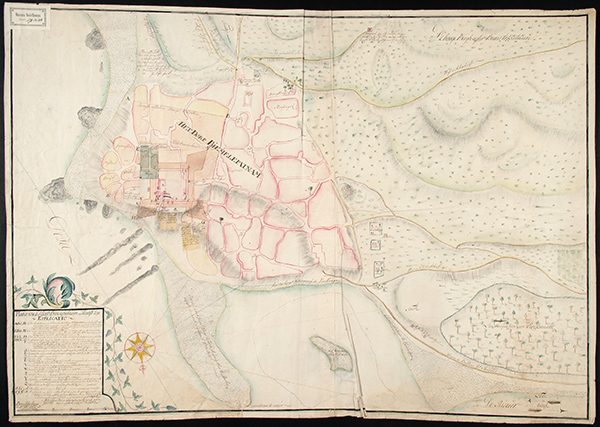 The second plan (COLLBN 002-12-040) depicts the projected fortress in detail. For every room, however large or small, the designated usage is mentioned on the plan. The engineer even added affixes to show the rooms on lower and first floor. Much space was given to the most important trading products: cotton, spices and rice. It is gruesome to recognise the word ‘slaafskamer’ in a smaller room, confirming the use of enslaved people to carry out several duties. 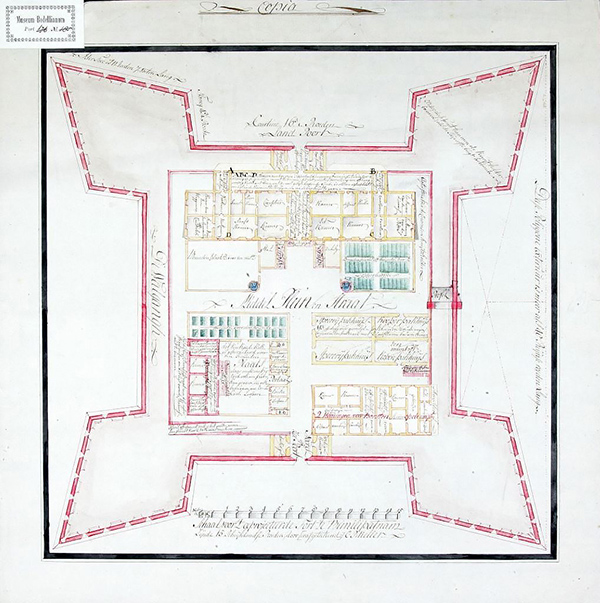 After the project was approved, Keller was given a new task in the more important settlement at Negapatnam. The actual construction was carried out by a VOC-servant of Asian descent, in the records mentioned as “Henk”. Because of bad constructional choices the walls collapsed in late 1759 from heavy rainfall and continuous sea waves undermining the stability of the stronghold. The VOC authorities were furious and held Keller accountable for the costs. The engineer tried to blame “Henk” for the disastrous construction as much as possible. A protracted case would haunt the engineer for years. In the end, he was pardoned for his part in the construction of the fortress, but his reputation was forever damaged.

Both plans of Bimilipatnam are now on display in the exhibition Mapping Asia at Museum Volkenkunde [Museum of Ethnology] which runs until March 4th 2018.