A Frisket Sheet for Printing Text in Red Ink

A beautiful parchment manuscript was cut up and used for its strength, twice.

Possibly in the 1100s, and possibly in the Netherlands, a Dutch scribe copied the Old Testament in Latin in extravagantly large letters. The script size stretched the text across many parchment folios, making the manuscript conspicuously expensive. His work was brightly painted, as seen here in the top half of the initial ‘V’ (‘Verba Ecclesiastes…’) starting the Book of Ecclesiastes. Then, it was destroyed. 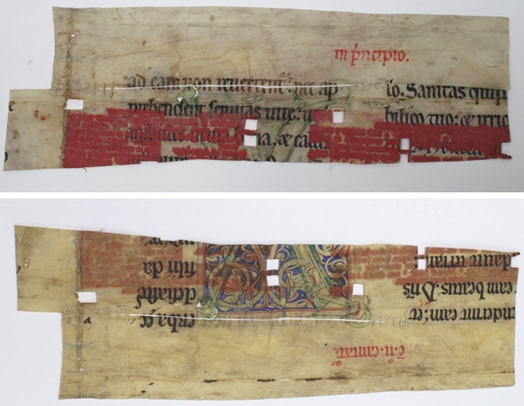 Fast forward several centuries. Johannes Gutenberg invented printing around 1450, and this manuscript, like many others, was ‘recycled’ as the new technology spread. A printshop acquired some of its large parchment folios as scrap. The printers inked the forme (the bed of type) in red, pulled one impression, and cut out holes for individual letters. Next, they inserted the skin into the press’ frisket (a frame that folds over the paper) for use as a frisket sheet (a mask that keeps the paper in place and, like a stencil, protects it from stray ink) for printing red letters. All of the type was inked in red, but the little holes allowed selected letters to be printed in red on the paper; the ‘black’ text was printed in red repeatedly on the frisket sheet, which blocked it from marring the paper. The fragment is one of only 60 known early modern frisket sheet fragments, but research is moving quickly—it was one of only 30 known several months ago, when Femke Prinsen, book conservator, found it as she was working on the rehousing project of the fragments in the collection of the Leiden University Library.

The book it was used to print will probably always will be unidentified, but much about it can be deduced. The two rectangles with a thick red crust of ink are the top or bottom of two pages, separated by a double-width margin. The page size indicates a sextodecimo format. One has a column of red letters in the middle of the page, which was common only in Roman Catholic liturgical calendars; important religious feasts are, in fact, ‘red letter days’. Many of these books were produced before the spread of the Reformation in the 1520s. The format and type size also suggest that the mystery book was printed in or after the sixteenth century. So, the parchment was used inside an early modern printing press to print the liturgical calendar preceding a small-format book for a Catholic market, possibly in the early 1500s. Because the alignment of red letters changes from page to page, the folio was useless to the printer after he had taken all of the impressions from one forme. Its size and pierced crease along one edge reveals its third function: a binder acquired it and anchored his binding to the text block of another book. The needle holes show where it was sewn into the binding, the large flap was pasted between the board and the pastedown, and the narrow flap rested inside the spine. The book it was used to bind is also unknown.

This extraordinary fragment was used three times, to convey, produce and then protect three texts, at three distinct points in the history of the book. It is a rare witness to the production of books not just before and after the invention of printing, but also inside an early modern printing press.

Further details: An overview of the project is available at http://www.ies.sas.ac.uk/research-projects-archives/early-modern-frisket-sheets, including a link to the latest version of the census of early modern frisket sheets, which supplements Elizabeth Savage’s article ‘Red Frisket Sheets’, Papers of the Bibliographical Society of America 108 (Dec 2014).