A Leiden Utopia in Leuven

The edition of Thomas More's Utopia printed in Hoorn 1630 aimed at protestant readers; ‘catholic’ elements were weakened or removed.

500 years ago, in December 1516, Thomas More’s Utopia appeared with Dirk Martens in Leuven. In 1553 Hans de Laet published the first Dutch translation in Antwerp. This anonymous edition without paratexts or illustrations presented itself as a practical book with useful tips for city officials.

The Southern Netherlands were the cradle of Utopia. The text was created (in Bruges and Antwerp), the story situated (Antwerp) and the finished book published (Leuven). In this prosperous and learned region, it will definitely have found a keen readers’ audience. After the separation in the Low Countries (1585) no other Utopia was printed in the South. The North, strongly geared towards the international book market, published Latin editions in pocket book format (with Blaeu and Janssonius), but also a new edition, again anonymous, of this first translation.

Between 1629 and 1634 several issues of this appeared in Hoorn, all in a small format. The lightly modernised text was made palatable for protestant believers: ‘catholic’ elements were weakened or removed. The anonymous preface is written by a reformed anonymous, in a sober, chastising tone, with references to the Old Testament, with biblical terms, and with a closing call to prayer. The reader is reminded that only obedience to Gods laws may create a good society. More’s ironic remarks at the end are almost fully censored for the intended audience. The catholic censorship is replaced by a Calvinistic one. So, too, Utopia, had to settle into the new, protestant, national identity of the Dutch Republic. Utopia is therefore presented as an old republic (such as that of the Batavi), which relied on the law-abiding devotion of hardworking honourable citizens. 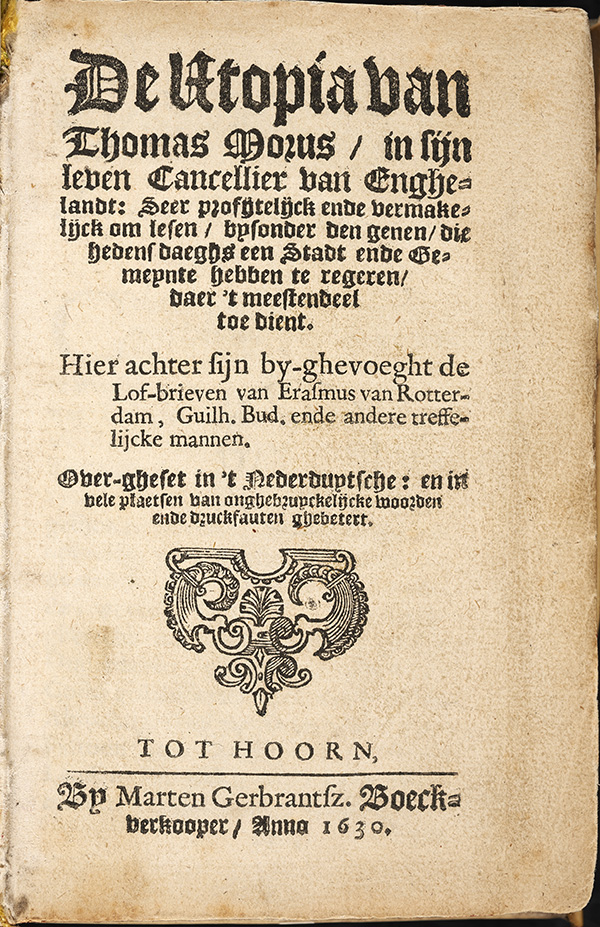