The monument, a commemorative glass window for the Jewish employees of S.A. Vles & Zonen, appears to have survived the demolition of the factory.

On the 4th of May, Remembrance Day in the Netherlands, we published a blog about a design for a glass window, in commemoration of the employees of the Rotterdam firm W.A. Vles & Zonen, who had died in concentration camps during World War II. At the time of publication we were unaware about the status of the glass: had it survived or even, had it ever been executed. These questions can now be answered. Information spreads quickly on the internet and we received comments and remarks that are very useful for the history of the firm and especially the glass. 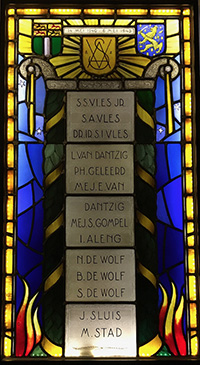 For the glass has survived. One might say, miraculously. In the 1970s W.A. Vles & Zonen was sold, including the firm’s real estate and the glass. It disappeared from sight until it was recovered in the 1990s by a glass artist.The glass was restored and returned to the family, who cherishes it until the present day. Unfortunately the lower part is missing. For that the drawing will remain indispensable. But the upper part has survived, including the names of all the victims. There are some discrepancies between the names in the design and those in the glass. This will have to be researched more but for now we can state that it is most fortunate, due to the keen eye of a glass artist and to the perseverance of the family Vles, that a war monument has survived.

An as yet unknown World War II monument for the Jewish employees of S.A. Vles & Zonen

Posted on May 4, 2018
A recent donation to Leiden University Libraries of drawings by the Dutch artist Willem Witjens (1884-1962) contains a design for a commemorative glass, remembering the employees of the Rotterdam metal recycling firm of W.A. Vles & Zonen, who fell victim to the persecution of the Germans in World War II. The design shows a monument, topped by volutes, the coat of arms of the firm with the founder’s monogram and the coats of arms of the city of Rotterdam and the Kingdom of the Netherlands. The monument, similar to a Greek stele, is lined with laurel branches. The background is filled with flames at the bottom and a starry night sky at the top. The monument is inscribed with a commemorative text: ‘Ter nagedachtenis aan hen die na de Duitsche terreur niet terugkeerden’ (In memory of those who did not return from the German terror), complemented by the names of the victims.

With the help of some databases and commemorative sites, we have tried to identify the people named in the design. Unfortunately we have not been successful in every case but these are the names listed:

S.A. Vles & Zonen had offices in the Coolsingel and Leuvehaven in Rotterdam, while their warehouses were in the street just behind the harbour, de Baan. The firm had been founded in the middle of the nineteenth century and at some time employed up to 200 people. Within a year after the start of the war the firm was placed under supervision by the Germans, and moved to Piekstraat 3 in 1942. Samuel A. Vles, the founder, was Jewish and so were many or perhaps even all of his employees. During the war a number of them fell victim to the Holocaust, dying in the German concentration camps of Sobibor, Auschwitz, Bergen-Belsen and Flossenbürg.

Whether the glass was ever executed and where it was placed, remains to be researched. The most likely solution is that it was located somewhere in the offices of the firm at Piekstraat 3, where it was located until well after the war. However, since the firm no longer exists and the factory at the Piekstraat is demolished, more archival research is necessary. Until then the drawing is an important monument to some of the victims of the German terror.

The donation of this and other drawings by Willem Witjens from the artist’s estate was received through the mediation of Ab Geelhoed (†) and Freek Heijbroek, former curator of the Rijksmuseum. The donation consists of 27 drawings, 28 prints and one painting. For this blog I received the help of Ruben Vis (on Twitter), the Rotterdam Municipal Archives, the NIOD, Institute for War, Holocaust and Genocide Studies, and my colleague Mart van Duijn.