A New Discovery in an Old Astronomy Book

One of the annotations reveals awareness for a faster calculation of sines known as the ‘Ingenious Way’ (Artificium).

Some months ago I needed to consult an astronomy book in the collection of Sir Isaac Vossius: an interleaved copy with anonymous annotations of Fundamentum Astronomicum, id est Nova Doctrina sinuum et triangulorum […] (‘The Elements of Astronomy, or, a New Theory of Sines and Triangles […]’). This book was published in Strasbourg in 1588 by the German scholar Nicolaus Reimers Ursus (1551–1600). The 1716 catalogue of Leiden University Library suggested that these annotations might be in the hand of Johannes Kepler (1571–1630). Before long, however, I discovered that as early as 1964 the Kepler Kommission from Munich had established that this was not the case, but this left open the original question about the actual authorship of the annotations. A first perusal informed me that nearly all annotations must have been written around 1620 by an Englishman. In order to identify the author I consulted The Mathematicians’ Apprenticeship. Science, Universities and Society in England, 1560-1640 by Mordechai Feingold (Cambridge, 1984). The most likely candidate appeared to be John Bainbridge (1582–1643), professor of astronomy at Oxford and a colleague of the mathematician Henry Briggs (1561–1630), whose name appears in the annotations.

A German monograph on Ursus, Nicolaus Reimers (Reimarus Ursus), Günstling Rantzaus-Brahes Feind. Leben und Werk (Munich, 1999) by Dieter Launert, made me decide to contact its author, since I had noticed that he was aware of the existence of the Leiden copy, but not that it was annotated. The photographic reproduction I sent to him turned out to contain a surprise for him: according to Dr Launert, one of the annotations (facing fol. 9r) reveals awareness of an unpublished method of the Swiss scholar Jost Bürgi (1552–1632) for a faster calculation of sines known as the ‘Ingenious Way’ (Artificium). Bürgi had taught this new method to his pupil Ursus, but the latter had promised his master to include only the scantiest details in his Fundamentum Astronomicum. Dr Launert thinks it probable that Henry Briggs managed to correctly interpret the summary information and shared the solution with his colleague Bainbridge. It was hitherto unknown that Bürgi’s method may have reached the outside world in this particular manner. Dr Launert is currently preparing a study on Jost Bürgi, which will also devote attention to this new discovery. 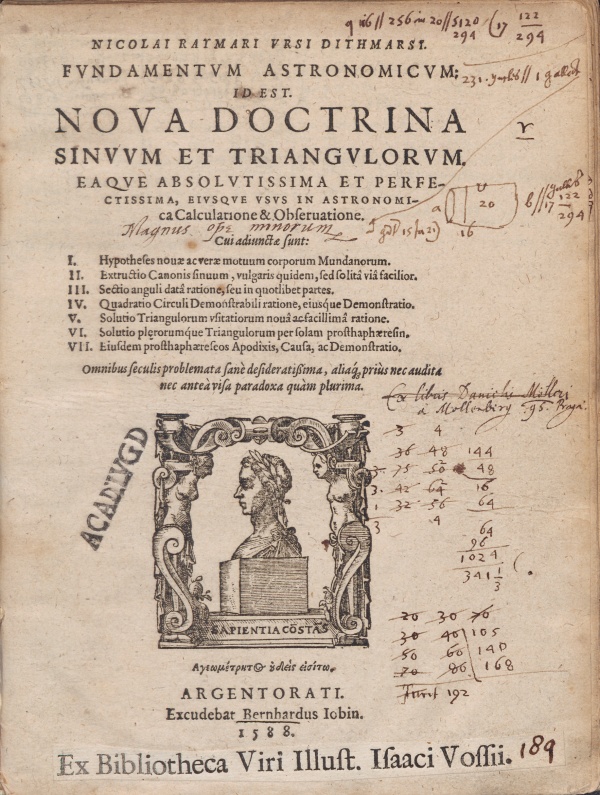