A Persian Quran for Public Worship

Qurans do not often come in this size. This seventeenth-century copy is even more special because of its Persian translation.

Most Qurans, either handwriten or printed, are made for private reading, and their usual size is that of the average novel. Gift copies may be larger and also more luxurious than usual. But some Qurans are so tiny that they fit into a locket that is worn around the neck, especially by women. With its impressive 55x73 centimetres in opened position, this two-volume Leiden Quran definitely belongs to the other extreme.

It was never intended for private use, but for a public place of worship such as a mosque or mausoleum. It would be placed on a lectern called rahlah,and a professional reciter would take his place behind it. Not that the reciter really needed the Quran in front of him – he normally knew the text by heart. But the reciter and the Holy Book together constituted a fitting display of piety and religious learning.

This manuscript Quran is even more special because it contains a Persian translation between the lines of the original Arabic text. It is therefore believed to be from Iran, where Persian was the language of everyday communication, and, more importantly, of the State.

The manuscript is not dated, but we believe that it is from the seventeenth century. In 1764 it was donated to the Leiden University Library, but we do not know by whom. It could very well have reached Leiden through the trade channels of the Dutch East India Company, which maintained trading stations on the coast of Iran. We still have the satchel of striped green silk in which it was first presented to the library. It is very much faded, but still largely intact.

Today, this Quran looks just as impressive as when it was first made. In 2016-2017 it took pride of place in the exhibition Heilig Schrift: Tanach – Bijbel – Koran at the Catharijneconvent museum, Utrecht. 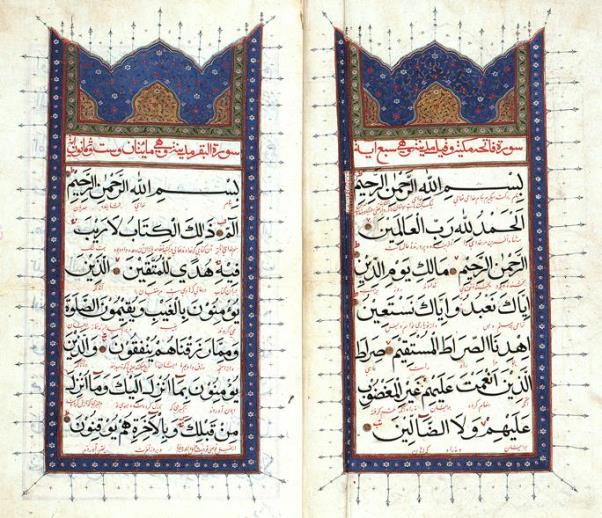