A Picture of a 1721 PhD Ceremony at Leiden University

More than 27,000 theses were defended at Leiden University

Guilielmus ab Irhoven from the Dutch city of Den Bosch (Sylvaducensis) defended his dissertation entitled Disputatio philosophica inauguralis de spatio vacuo at Leiden University on 7 July 1721. Willem van Irhoven (1698-1760), as he was later known, then went on to become a vicar in Ede and a professor in Utrecht. The picture on the title page of his Leiden booklet (copy: 237 C 7: 21) is very special as it depicts a PhD ceremony in an engraved frame under the title. This is a disputatio with the so-called Droste effect: the title page shows a dissertation ceremony and thereby refers to itself. On both the left and right, the symbols of the Leiden faculties can be seen: theology, philosophy, law and medicine. And of course the symbols of the city of Leiden itself, namely the keys of St Peter.

Special effects emerge as the three pictures of the PhD ceremony can be traced back to the (actual) Leiden situation. On the right: the secret examination in the Faculty Room (Explorant vires). On the left: the defence of the dissertation in the Great Auditorium (Pugnat). In the middle: the handing of the degree certificate in the Senat Room (Dant praemia digno). The designer of the title page has been tracked down: Frans van Bleyswyck (1671-1746). Seventy more or less identical frontispieces by van Bleyswyck were used on Leiden dissertations between 1713 and 1744, 35 of which bear his signature. The influence of French classicism is clear in his designs.

More than 27,000 theses were defended at Leiden University between 1575 and 2011. Between 1575 and 1860 there were over 13,000 and from 1860 to 2011 the total was more than 14,000. This may seem a lot but it was not unusual for a student to write more than one disputatio while at Leiden University. To give two examples: Hugo Grotius wrote two theses (available online in the Leiden repository), in April and September 1597. And Godifridus Du Bois (from Kruiningen) defended his philosophical dissertation at 8:00 and his Dissertatio medica inauguralis de auditu at 10:00 both on 6 February 1725. Today about 300 PhD ceremonies take place in Leiden every year.

Since the late 1990s, many Dutch universities have been busy making electronic versions of new and old dissertations. To date, only Eindhoven University claims to have succeeded in making all its dissertations available online: a total of almost 3,000 volumes. Leiden has started digitizing all 27,000 of its theses but this process will naturally take some time. The (over 2,000) Leiden dissertations that are already available online can be accessed worldwide. 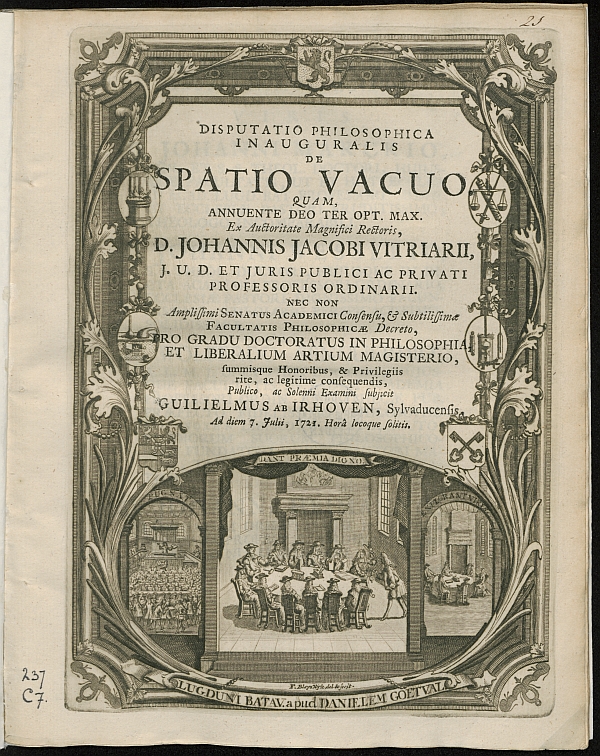