‘or we shall destroy your vaulted ditch under the street’.

In the Middle Ages the city of Amsterdam had 22 convents. One of them was the convent of St Mary Magdalen, since c. 1425 affiliated to the Order of the Canonesses Regular of St Augustine. Like most of the other convents, it was situated in the southeastern part of the city.

The relation between convents was not always peaceful. In 1462 the neighbouring convent of St Barbara, connected to the Third Order of St. Francis, built its church without consent up against the dormitory of St Mary Magdalen. In 1463 the tension increased. St Mary Magdalen refused to pay fourteen guilders to St Barbara for half of a lead downpipe between the church and the dormitory. ‘You must pay within four days’, the bailiff and mayors declared, ‘or we shall destroy your vaulted ditch under the street’. Furthermore, they threatened the convent with financial measures. The nuns were scared to death and paid up the money, but they sent for notary Giisbertus Reyneri to draw up an affidavit about the incident. The document is written on parchment and provided with the notary’s mark. It is entirely in Latin, but the threats are quoted literally in the vernacular.

In 1578 Amsterdam joined the Dutch Revolt against Spanish rule. All convents were closed and their properties confiscated; the convent of St Mary Magdalen was transformed into a leper house.

This document from 1463 is part of a collection of charters pertaining to mostly Medieval women’s convents in Amsterdam, 1371–[1704]. It is preserved in the collections of the Society of Netherlands Literature (Maatschappij van Nederlandse Letterkunde) in Leiden University Libraries (classmark LTK 821: 35).

Post by Arend Pietersma, Curator of Archives at Leiden University Libraries from 2008 until September 2015. 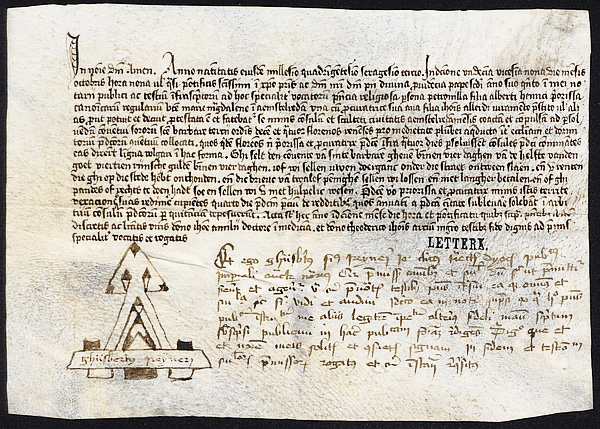