A world treasure of great weight: the charter of King Rājendra Chola I

One of the most remarkable pieces of Leiden University Library – as to weight, form and material – is a copper and bronze charter from South India (Or. 1687). Its inscriptions have been meticulously engraved in twenty-one copper plates that are held together by a massive bronze ring. The ring is closed with the impressive seal of King Rājendra Chola I (r. 1012-1042). The construction weighs no less than 30 kgs and symbolizes as it were the power of the king who had the charter made.

The copper plates contain texts in Sanskrit and in Tamil. The Sanskrit part explicates the family tree of the Chola dynasty, beginning with a mythical ancestor, the Hindu god Vishnu. The part in Tamil reminds of great achievements and good deeds done by Rājendra I’s father, king Rājarāja I (r. 985-1012). A long passage recounts how, in the 21st year of his reign, Rājarāja I donated the revenue of a whole village to a Buddhist pagoda. This gift is worth mentioning. It illustrates how a tolerant Hindu raja had allowed a Malay Buddhist King of the empire of Sriwijaya (Sumatra and the Malay peninsula) to build a sanctuary in the important port and trading town of Nagapattinam, positioned on the Coromandel coast.

Rājendra Chola I’s relationship with the king of Sriwijaya and his maritime empire on the other hand was less peaceful. It was under his reign that the Cholas became one of the most powerful ruling dynasties in Asia. In 1025, an armada was sent eastward by Rājendra I. Ports and the capital of Sriwijaya (located where currently Palembang is situated) were conquered and plundered, a fabulous royal treasure was looted and the King was taken prisoner. The tower-shaped pagoda of Nagapattinam, however, defied the ages long after. It was only taken down in 1867. 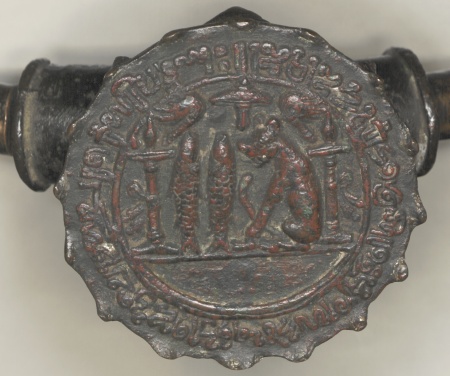