A unique possession for the Leiden University Library to treasure!

Any researcher interested in the ‘April Storm’ of 1853 – the ‘pamphlet war’ that was triggered by the introduction of the Roman Catholic episcopal church hierarchy in the Netherlands – and wishing to consult contemporary sources, will sooner or later come across the Naamlijst der geschriften, enz. betrekking hebbende op de invoering der bisschoppelijke hierarchie in Nederland ao 1853. [List of Writings etc. concerning the introduction of the episcopal hierarchy in the Netherlands 1853] (Utrecht, 1870). This inventory, a corset-tinted 23 page booklet, was compiled and published by the Protestant minister Hendrik de Voogt shortly before his premature death.

The List includes 384 titles of brochures, songs and prints, most of which De Voogt actually had in his possession. Should you wish to consult these texts, the Special Collections Reading Room at the University Library in Leiden is the place to visit. Boxes PORTEF 121 I-VII turn out to contain just about all the documents listed in the booklet – in fact, they are numbered in the exact same sequence as De Voogt used. How is this possible? The 1871 Annual Report of the Maatschappij der Nederlandse Letterkunde[Society of Dutch Literature] provides the explanation:

Due to a generous donation by [...] Mr W.J. de Voogt of Amsterdam, we have been able to incorporate into our library what may well be the only collection of writings and documents pertaining to the April Movement of 1853, as collected by his late brother, the minister of Haastrecht H.L. de Voogt. The documents are all in boxes, sorted into alphabetical order, as per the catalogue published by the deceased himself.

Post by Ineke Smit, PhD candidate at LUCSoR. Her research is on discussions between adherents of 'modern' Protestant theology and Roman Catholics in the 19th century. 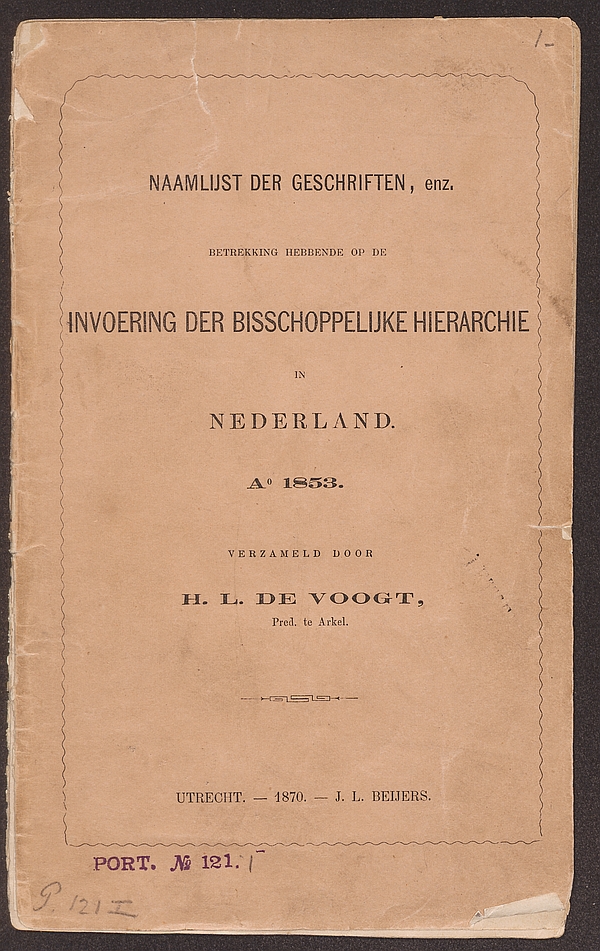