ABC for the advanced: the trompe l'oeil booklet of Cryn van Zuyderhoudt

Those who look closely will find many treasures in this book.

At first glance we see a printed abc-booklet with some loose sheets in it (LTK 1889), in this case a tattered fragment of a psalm book and a picture of a white woman washing a black woman. However, the reader is deceived. There are not three sheets, but only one, and it is not printed but in manuscript. The Amsterdam calligrapher Cryn van Zuyderhoudt (1704-1784) made this fascinating book in 1779. He very meticulously copied a traditional printed abc-booklet in Gothic script. He partly painted the text over with pictures of prints, paper cuttings, and leaves from psalm books and almanacs, making it mostly illegible. Some of these ‘inserted’ leaves appear to be transparent and others have holes in them, just showing the underlying text. On the remaining pages following the text of the abc Zuyderhoudt copied a series of prints with poems. The headings and captions accompanying these prints are truly calligraphic samples.

This booklet of Cryn van Zuyderhoudt is a wonderful example of the little studied genre of trompe l'oeil books. At present, in addition to this copy of Zuyderhoudt, only three such books are known: a second book by Zuyderhoudt from 1779 (UB Amsterdam), a book by Johannes Klumper from 1737 (UB Amsterdam) and a book by Joshua Huneveldt from 1735 (KB The Hague). These booklets fit into the larger and more famous genre of trompe l'oeil scenes, such as those by Willem Bilderdijk of which Leiden University Library holds a few copies. Zuyderhoudt also made such representations, in which he uses the same images and ephemeral printed matter as in his abc-booklets (Rijksmuseum and RKD).

The special thing about the booklets is that they add an extra dimension to the trompe l'oeil: they invite you to read while at the same time making reading impossible. What inspired the creators to make such books is not entirely clear. They undoubtedly serve as proof of competence. But with Zuyderhoudt there is more going on. He seems to deliberately comply with enlightened ideas on reading education as they were emerging in the second half of the eighteenth century. In this booklet he plays with the tension between manuscript and print, gothic and roman type, words and images, reading and watching. By making the text difficult to read, he challenges the reader to learn to read better (ie: roman and italic instead of gothic letters) and also to look better (literally seeing through the images would yield a deeper level of understanding). To assist the reader Zuyderhoudt even offers full size spectacles in his book – painted opposite the title page. Those who look closely will find many treasures in this book. For example, what word can be read through the fictitious hole in the sheet shown here?

Post by Nelleke Moser, associate professor of Literature and Society at the Vrije Universiteit Amsterdam. 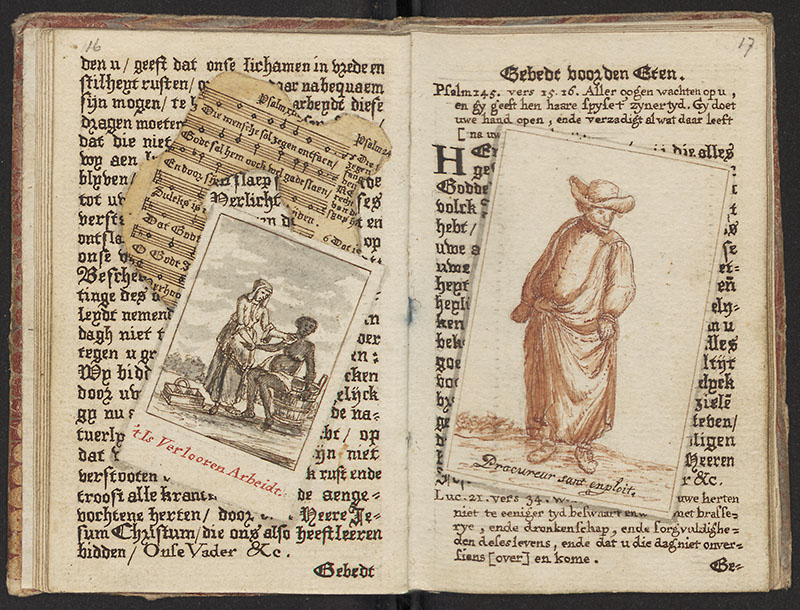