An Attentive Public in the Courtroom

Never published: Suriname. Views, Types and Costumes, drawn after nature by A. Borret.

Suriname must have made a lasting impression on the lawyer and Redemptorist father Arnold Borret (1848–1888). In 1878 Borret had left for Paramaribo, the capital of Suriname, where he was employed as a clerk at the Court of Justice. Later he became a judge and a member of the ‘Koloniale Staten’, the colonial council of representatives. Apart from his official duties, Borret was a prolific draughtsman as well. Besides luscious landscapes he preferred to draw the different racial types in Suriname: Creole women in their typical dress, the ‘kotomisi’, immigrants from China and British India. Borret concentrated on the particular and exotic aspects of his subjects. Local context was irrelevant to him. Remarkable in this scene from the courtroom is the presence of a European man. Europeans figure rarely in Borret’s work, but in the courtroom they were a common view.

Borret intended to publish his drawings in a book, entitled Suriname. Gezichten, Typen en Costumen, naar de natuur geteekend door A. Borret (‘Suriname. Views, Types and Costumes, drawn after nature by A. Borret’). He made a design for the cover and in the table of drawings the courtroom scene is listed as No. 57. Eventually the book was never published. Shortly before Borret joined the congregation of the Redemptorists, he sent the drawings to his brother Theodoor in the Netherlands. His brother donated the drawings to the Royal Netherlands Institute of Southeast Asian and Caribbean Studies (KITLV) in 1911. Borret died from typhoid fever in 1888.

The courtroom scene by Borret is included in the exhibition Dynamic Suriname: Culture and Migration, which will be on view at the University Library from September 25, 2015 until January 13, 2016. More information about Borret can be found in the monograph Suriname: gezichten, typen en costumen naar de natuur getekend door A. Borret by Rosemarijn Hoefte and Clazien Medendorp. 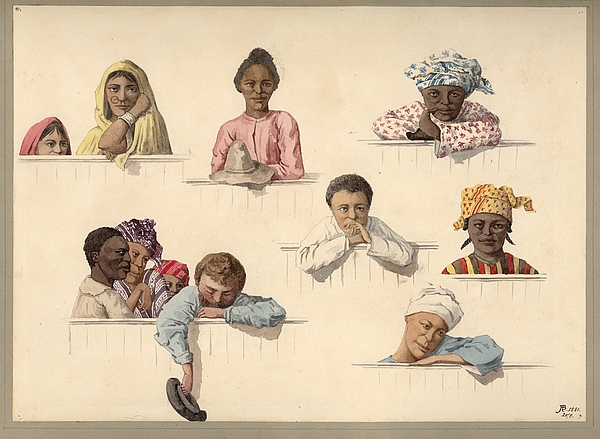