Why do women weep more than men?

In 1661 a book about tears was published in Paris, only one of the many works from the varied oeuvre of the Frenchman Pierre Petit (1617-1687). Although educated as a medical doctor, Petitus seems never to have practiced in that capacity. However he did write some books about medical subjects. In addition to tears, he wrote about blood transfusion and he published a volume of medical case histories. His other works dealt with a variety of subjects, ranging from the properties of tea to the question whether amazons really existed. His choice of subjects proves Petitus to be a great lover of the Greek and Latin classics. Moreover, Petitus was a Latin poet in his own right.

De lacrymis uses classical philosophical, medical and literary sources in close connection. Petitus’ main example is Aristotle, for the content as well as for the form of his work. The exposition is arranged according to 3 of 4 of Aristotle’s causae: the causa materialis (what are tears made of?), causa efficiens (how do tears come about?) and causa finalis (what is the purpose of tears?). The third part of the book is devoted to 20 Problemata that hark back to the Problemata formerly attributed to Aristotle. The origin is not certain, possibly Aristotle is author of part of the work. Questions treated by Petitus include why ‘good’ (brave) men are prone to weeping, why women weep more than men and whether animals are also able to weep.

Petitus proves to be informed about new ideas, as is clear from vicious remarks about Descartes and a few more friendly remarks about other recent authors. On the whole De lacrymis reads as one long plea for the classics, not only for philosophical and medical works, but also for poetry and prose. Citations from Homer, Virgil, Ovid and Petronius carry as much authority as those from Aristotle, Hippocrates and Galen. For example, a beautiful description from Lucretius of a cow looking for her lost calf (see the depicted pages 132-133 from the Leiden copy 2321 I 24) is used as support for the conclusion that animals can indeed weep.

Petitus’ line of reasoning is not always easy to follow: the material is presented in accordance with a scholastic way of reasoning in which conflicting opinions are presented, followed by a concluding synthesis. Most of all, Petitus appears to be playing with his material, he seems to juggle with citations with a good eye for the humorous side.

Post by Ineke Loots, visiting scholar on History of ancient medicine at the Faculty of Humanities (Centre for the Arts in Society) of Leiden University. 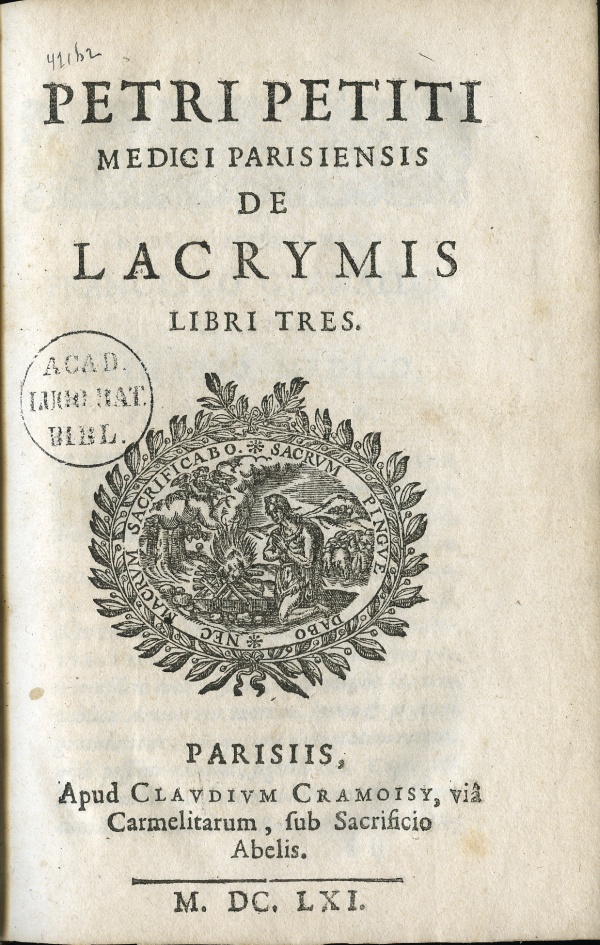