The Swiss pastor and philosopher Johann Caspar Lavater (1741-1801) was highly interested in physiognomy, the pseudoscience that studied the relationship between a person’s character and his outer appearance. He wrote an extensive book about the subject, published in the years 1775 to 1778, trying to provide a sound basis for this science. As a documentation to his studies, Lavater maintained an extensive image library. The shown portrait of the Dutch stadtholder Frederik Hendrik (1584-1647), engraved by the Flemish Coenraet Waumans (1619-1661), was once part of that library. Underneath the image Lavater wrote down his observations on the prince’s character: ‘Fürstlich edles Gesicht; verstandreich Aug und Augbraun / Sanftklug Stirn und Nase, doch sanfter und klüger der Mund noch’ [Aristocratic noble face; intellectual eye and eyebrow; sensible and wise are his forehead and nose, but even more sensible and wise is his mouth].

To avoid any doubt about the authorship of those remarks, someone has inscribed in the lower margin: ‘scripsit suâ ipse manú J.C. Lavater’ [written by J.C. Lavater himself]. Comparison with other portraits in Lavater’s still existing library in Vienna (kept in the Österreichische Nationalbibliothek) leaves no room for doubt whatsoever: all portraits have been mounted in a comparable manner, with a coloured (often: green) border and a short inscription illustrating the person’s character in Lavater’s handwriting. Lavater himself sold parts of his image library, mostly for financial reasons. When and how exactly this portrait of Frederik Hendrik arrived in Leiden is unknown. A note on the reverse of the engraving, reading 1847, may be an indication of the year of acquisition. 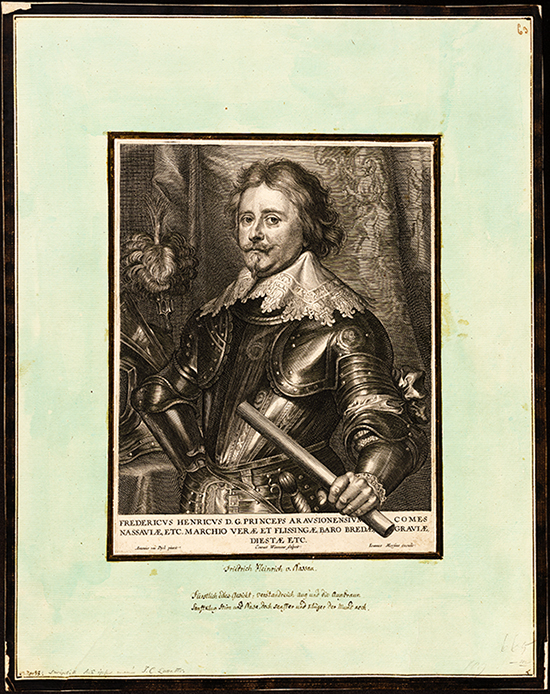