Astronomers and their observatories in the picture: Van de Sande Bakhuyzen’s photo album

in grateful esteem for his services rendered to science and country

On 21 September 1908 Hendrik van de Sande Bakhuyzen was offered a monumental photo album ‘in grateful esteem for his services rendered to science and country’. The occasion was his retirement as professor of astronomy at Leiden University and director of the Leiden University Observatory, Today, Bakhuyzen’s scientific work has almost been forgotten, but apparently he was a respected scholar in those days. He owed this especially to his activities in international scientific organizations. The album contains almost 600 unique pictures of scientists, observatories and telescopes. Many portraits are signed. They come from all over the world, from Australia to Finland and from Argentina to Japan.

Central Europe is represented by a substantial number of pages. In that period it formed the centre of the scientific world. Apart from pictures the album also contains a magnificently illuminated title-page and a water-colour of the Leiden University Observatory by Van de Sande Bakhuyzen’s brother Julius, a landscapist of the School of The Hague, with the subscription ‘… the gliding stars he called by name, as onward they advanced through the still heaven’ (Aeneid, 3, 515). Almost all known Dutch scientists of that time are present in the album, including for example physicist H.A. Lorentz, hydraulic engineer Cornelis Lely and astronomer J.C. Kapteyn. The most famous foreign scholar is presumably Max Planck, one of the eight Nobel Prize laureates in the album. Other famous names include Norman Lockyer, the founder of the journal Nature, and G.E. Hale, who build the world biggest telescope four times in succession. Furthermore there are hundreds of less known persons, like the Dutch priest Johan Stein, who represents the observatory of the Vatican. 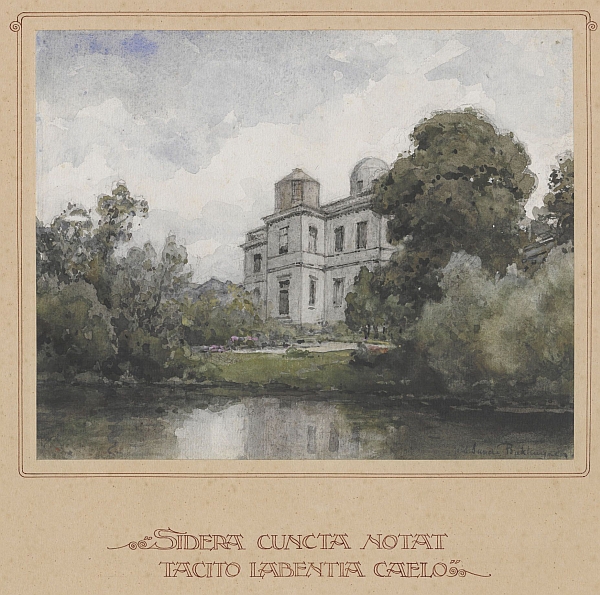