In hell, ruling the gloomy world of the doomed, Lucifer is situated at the centre of the crust of ice where the worst of sinners are being punished. The devil's genitals constitute the exact Centrum Mundi.

In this engraving Lucifer, ‘Bearer of Light‘, who after his fall had become ruler of the gloomy world of the doomed, is represented in a quite dramatic pose. The three-headed monster is situated at the centre of the crust of ice where the worst of the sinners, those who betrayed their benefactors, are being punished. The devil‘s genitals, as goes forth from the text surrounding them, constitute the exact Centrum Mundi.

The print has a complex function by which the spectator is informed of the most recent insights in the world of Lucifer. The left cartouche offers the scientific legend at Manetti‘s half diagram drawing: a view from above and a diameter of Hell. The curling page on the right shows a paraphrase of the last scenes of canto XXXIV where Dante and Virgil‘s descent along the hairy trunk of the devil‘s body to the centre of the earth is described. Their orientation changes as they pass the centre. The place where their feet were first, is now occupied by their heads, and along the upward pointing lower legs of the devil they begin their upward journey to the Purgatory. By placing the text upside down the designer of the print has succeeded in visualizing the antipodal forces of the southern hemisphere in a witty way. 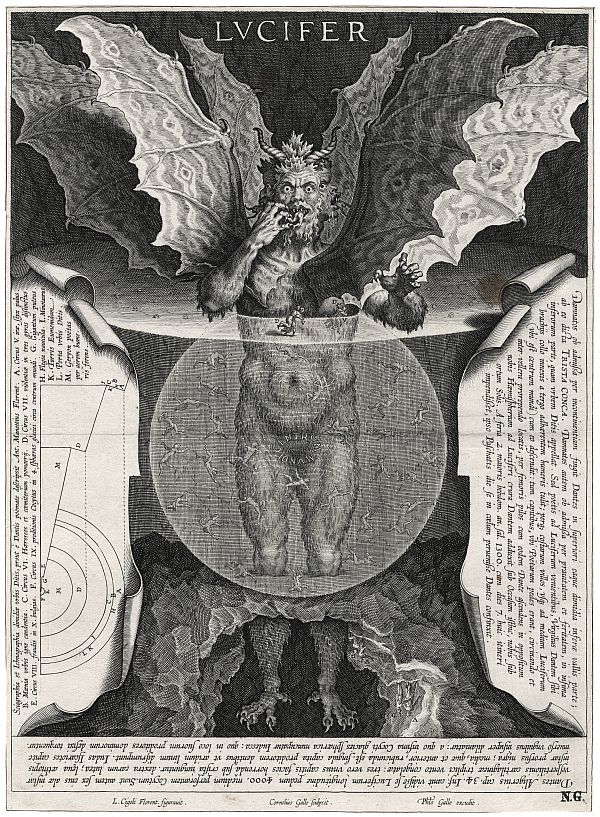