Dogs in the library (1610). A team for utility and entertainment

Dogs were a much-loved subject in early modern prints. On the oldest depiction of the Leiden University Library, a print from 1610 after design by Jan Cornelisz Woudanus (ca. 1565-1615) two dogs are visible in the foreground, and not without purpose.

This print is part of a series, with depictions of the Hortus Botanicus, the Anatomical Theatre and the fencing school of Leiden University. Every print shows interiors with collections. Typical for these prints is the way Woudanus organised his subjects using pairs. This is also visible in his depiction of the dogs in the library.

When you take a closer look at the dogs, you notice markable differences. The dogs are opposites in several ways, for example, in breed and size. The dog on the left looks like a Brak, a breed commonly used for hunting. The one on the right is a Little Lion Dog (leeuwhondje), which was more of a companion animal.

In the movements and character of the dogs, too, differences can be found. The two animals are moving away from one another, a theme also reflected in the depictions of riders below the paintings in the background. The Brak is walking to the left, toward the open space, while the Little Lion Dog stays at the center. Also, the Brak is panting while moving and hangs its head despondently, while the Little Lion Dog is seemingly dancing. Contrary to the tired Brak, it playfully frolics around and stretches its paws skyward, mirroring the person depicted beside it.

Moreover, the dogs’ furs are quite different from each other. The short-haired Brak is a bit shaggy here and there, while the luscious Little Lion Dog’s fur is quaffed and groomed, even featuring a cute pompom at its tail. The Little Lion Dog wears a goatee, again roughly mirroring the man next to it, and the Brak wears a collar that is absent with the Little Lion Dog.

The Little Lion Dog steers the viewers gaze toward the background, over the central line, where we find portraits of William of Orange, his son Maurice and their heraldic coats of arms. The connection between the Little Lion Dog and the Lion of Holland seen on the coat of arms could hardly have been made more obvious. 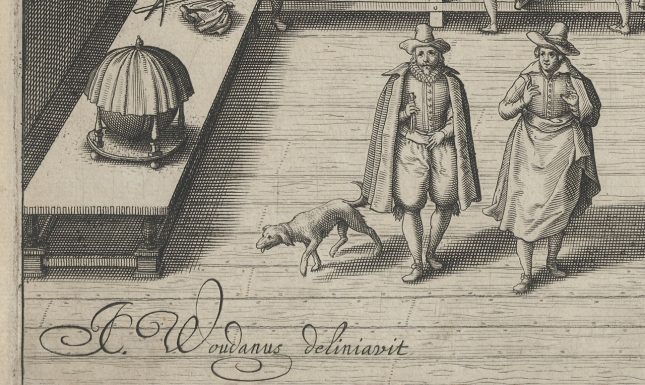 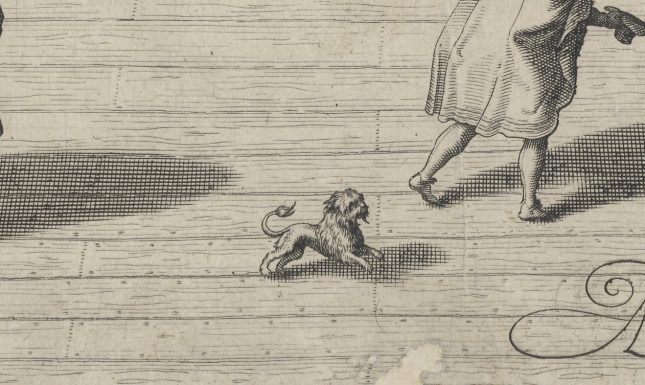 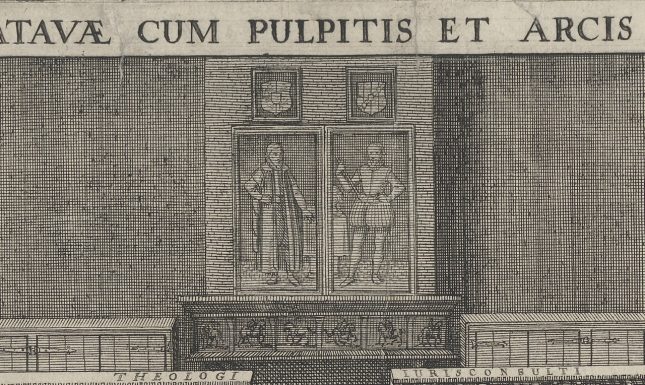 The effect of the dogs on the viewer

The pair of dogs in the foreground of the print featuring the library tells us a lot about Woudanus’ attention to detail. By arranging details in pairs, he invited the viewer to draw comparisons. These observations were meant to captivate the viewer and hold their attention, resulting in an image that was both cohesive and easy to remember.

The central line in the depiction, leading from the Little Lion Dog to the Oranges’ coats of arms drew the viewers gaze through the entire length of space. This activated the viewer to make connections between the two and speculate on possible meanings.

Basically, the two dogs guide us through the library in a playful manner, cleverly intertwining utility and pleasure in the print design.

About the author: Corrie van Maris is a collection specialist at the Leiden University Academic Historical Museum and is writing her PhD thesis on the origin and function of Woudanus' four prints of Leiden University.