On March 1, 1516, Erasmus’ Novum Instrumentum came from the presses of Johann Froben at Basle. It contained a new Latin version of the New Testament, the first published edition of the Greek text, and extensive explanatory notes on the translation. Erasmus’ aim in publishing this work was not primarily, as is often assumed, to publish the editio princeps of the Greek New Testament, but to present the New Testament in better, more classical, more elegant Latin than that of the traditional bible, the fourth-century Vulgate. The Greek was added to allow readers to check whether the alarmingly new wording and phrases in Erasmus’ version were justified in the light of the Greek. The new translation immediately met with great enthusiasm and vehement opposition.

Seen from the point of view of the history of culture, the significance of Erasmus’ Novum Instrumentum and its four revised editions until 1535, cannot be overestimated. With this new version and his annotations, Erasmus made his readers realize that the Vulgate of old was not the only possible, incontestable text of the New Testament: its wording could be criticized on text-critical, linguistic and stylistic grounds; it was susceptible to discussion and the admission of alternatives. Erasmus made it clear that a translation can always be critically re-examined in the light of its source text. He explained that a new era required a new translation and that the value of each translation depends on various factors, such as its objective, its intended readership and their educational level. By publishing a Greek text Erasmus, for the first time in history, made it possible for substantial numbers of interested persons to read the New Testament in its original language and to experience the particularities and nuances of its idiom. Ultimately, however, Erasmus wanted his new translation to contribute to the moral reform of Europe. The Leiden University Library possesses two copies of the Novum Instrumentum. The picture shows the beginning of the Greek and Latin texts of Paul’s Epistle to the Romans (Erasmus, Novum Instrumentum omne, Basle, Froben, 1516. Leiden, Univ. Libr., 754 A 1, p. 1 after p. 324). 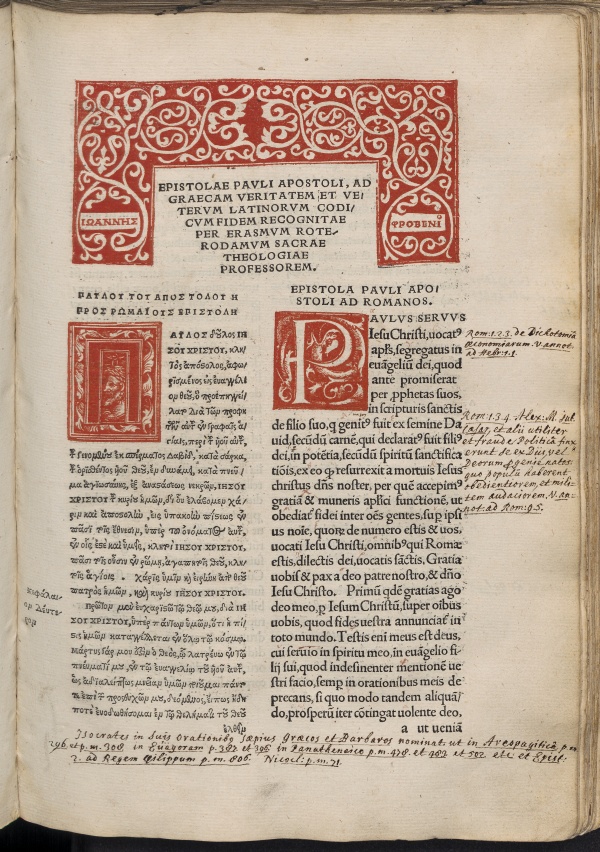