"God created the world but the Dutch created the Netherlands", Descartes supposedly once said. Leiden University Libraries acquired 40 photographs by Dutch photographer Marie-José Jongerius (b. 1970), who photographed an extreme example of this Dutch passtime.

Her dazzling photo series Lunar Landscapes and Concrete Wilderness depict the completion and first use in 2011-2015 of the new land ‘Maasvlakte II’. This land was newly created in the Northsea, for the purpose of serving large-scale globalised container transshipment – but the creation of new nature and the stimulation of biodiversity as well.

Jongerius’ photographs are topical in showing contemporary spatial development of the Netherlands. With a size of 2.000ha, the creation of Maasvlakte II, westward into the Northsea, meant an immediate, 20% expansion of the surface of the already huge Rotterdam harbour. With a technique called sand nourishment, which Dutch engineering is internationally renowned for, Maasvlakte II is created entirely from scratch - raised out of the water - for the purpose of bearing facilities for trade, transport and in the end: profit. A well-known earlier example of this type of ‘infrastructure landscape’ is the Haarlemmermeer polder, which now accommodates Schiphol International Airport and much of its related industry. Maasvlakte II, however, goes further: it carries highly automated and robotized, large-scale and globalized container transhipment facilities, to which people are only very rarely granted access, for maintenance or other instrumental activity. The photographs engage the complex discussion about exploitation and dehumanization of landscape but are by no means a one-dimensional complaint.

Photographer Marie-José Jongerius works in the tradition of photographers like the German photographers’ couple Bernd and Hilla Becher (resp. 1931-2007 and 1934-2015) and their pupils of the so-called ‘Becher-Schule’, like Andreas Gursky, Thomas Struth and Candida Höfer. In the last thirty or so years before 2000, these artists set a standard for large-format colour landscape photography. They worked with big, static field-cameras, which produce highly detailed and well-balanced spatial images. With these and other artists and writers of the ‘Anthropocene’ (the epoch in which humanity's influence on nature has become dominant), Marie-José Jongerius shares an interest in humanity's exploitation of the land. Humanity brings de-animating systemization but at the same time, new concepts of nature, wilderness and beauty. This is especially relevant for the case of the Maasvlakte II: around the industrial zone, in the outside contours of the area, nature is designed and produced, creating an enchanting environment suitable for recreation, as well as enhancing rich diversity of flora and fauna, like the once-endangered seal. Moreover, Jongerius photographed Concrete Wilderness in collaboration with the company APM Terminals, which built the first emission-free container terminal in the world on Maasvlakte II.

Lunar Landscapes and Concrete Wilderness depict the period of 2011 through 2015, in which Maasvlakte II (conceived in the first decade of this millennium) was completed, and companies made their first constructions in the emptiness. First commissioned by art-foundation SKOR and the Port of Rotterdam collaboratively for Lunar Landscapes, Jongerius was enthused and arranged a second series Concrete Wilderness herself, in collaboration with one of the first companies to build in the zone. After receiving the honour of being displayed in an exhibition in the Nederlands Fotomuseum in Rotterdam and being included in the publication of the prestigious book Portscapes on the occasion of the completion and first use of the Maasvlakte II in 2013/14, Jongerius’ photo series had not yet been entered in a heritage collection: an omission now resolved by this acquisition by Leiden University Libraries.

The commissioned photographs of Maasvlakte II fit in the tradition of civil engineering photography. In this photograph from Leiden University Libraries' photo collection, nineteenth-century photographer Johann George Hameter (1838-1885) not only captured the construction of a dry dock; he also honoured and commemorated it in dramatic fashion. Where Hameter used an embellishing viewpoint and a negative mask to artificially add a dramatically cloudy sky over the scene, Jongerius uses other visual means to render beauty to the newborn land of the Maasvlakte II: she chose to photograph by night. 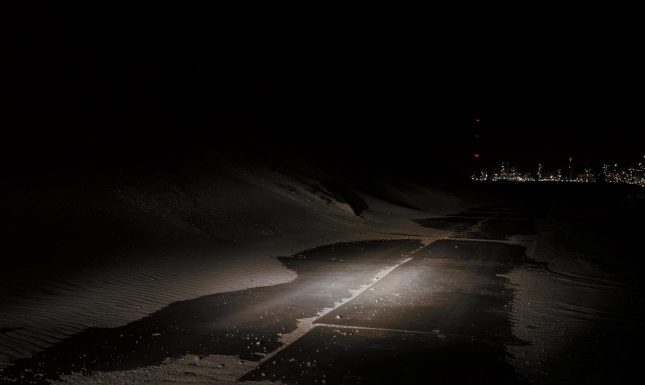 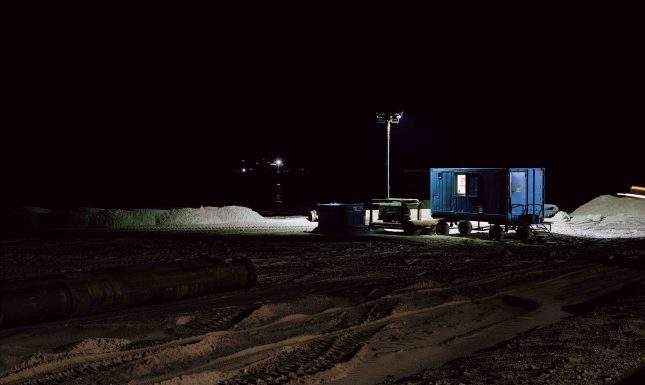 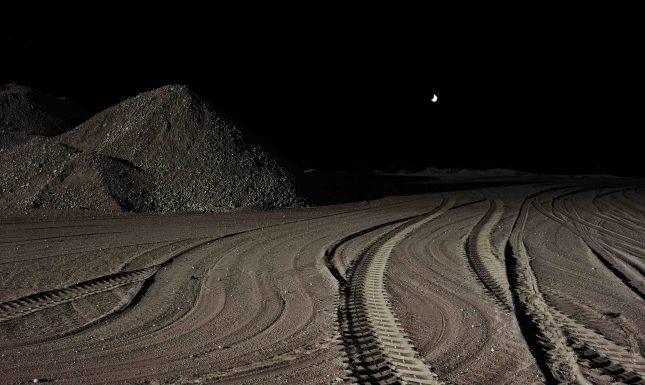 Darkness and the related enchantments of mystery are well-known from Romantic paintings. In Jongerius’ series Lunar Landscapes, terrains and buildings appear iridescent in the sheen of the moon and their own artificial lamps. Associations are easily made with the creation of light and land from water as written down in Genesis. The second series, Concrete Wilderness, shows how in this infrastructure -dominated landscape, geometry and repetitive patterns rule. While some people reject this systemizing geometry as a dehumanization of our environment, others see in it the aesthetics of our times. Jongerius’ photographs seem to constitute the latter.

About the guest co-author: Marie-José Jongerius studied at the Instituto Superiore della Fotografia in Rome Italy, and at the Royal Academy of Visual arts, BA photography, The Hague. She has published 5 books: Sweetwater (2001), Lunar Landscapes (2012), Concrete Wilderness (2014), Edges of the Experiment (2015) and Los Angeles Palms (2017).