Half a house as cover design

This book contains rather nostalgic, but also humorous remembrances of ‘De Indische’ (‘The Indian’), the name by which the training institute for the former Dutch East Indian civil servants and its professors was also known.

Using the pseudonym Tjeerd Flappuith (‘Theo Blabbermouthe’), in 1902 Dr. A.A. Fokker (1862-1927) published the book Toen ik Indisch student was (When I was an ‘Indisch’ student). It was published by the Amsterdam company C.A.J. van Dishoeck, which also published Herman Teirlinck’s novels. The book contains rather nostalgic, but also humorous remembrances of ‘De Indische’ (‘The Indian’), the name by which the training institute for the former Dutch East Indian civil servants and its professors was also known.

In 1864, the Delft township took the initiative of founding the training institute. In it, were taught the ethnology, geography and social studies as well as indigenous languages and cultures. The institute was housed in an old municipal school located on the Oude Delft 69 and opened its doors in 1875. There were merely two lecture rooms in the building, and it had a small room where the ethnographical collection was kept. As a consequence of the expansion of the building, in 1895 the old façade was replaced by one in Dutch neo-renaissance fashion. As a result of low job opportunities in the colony, the educational program was discontinued in 1901.

Initially, the artist who drew the cover design for the hardcover edition of the book, portrayed the building with its 1895 façade. Nonetheless when the bookbinding was on hand, one opted for the depiction of the front as it had looked in 1875 because this better fitted the depiction of the exterior by its author. Flappuith wrote: ‘The thing more or less had the appearance of a “half house”, like folks say: a door and beside it, on your right-hand side when standing in front of it, two windows. Another floor stood on top and then you had the attic and roof. Looking at it, so, from the outside, that didn’t leave much of an impression. Any random “hoogere burgerschool” looked better than that.’

Additionally, the drawn title ‘De Indische School te Delft’ in the sketch was not transferred to the cover unchanged. The same goes for the author, who, in the concept, was still named Jan Flappuith (‘John Blabbermouthe’), but later became Tjeerd Flappuith (‘Theo Blabbermouthe’). Especially in its typography, the whole notably displays the style from around 1900. The question which remains unanswered until today is, who the draughtsman was who created the cover design. 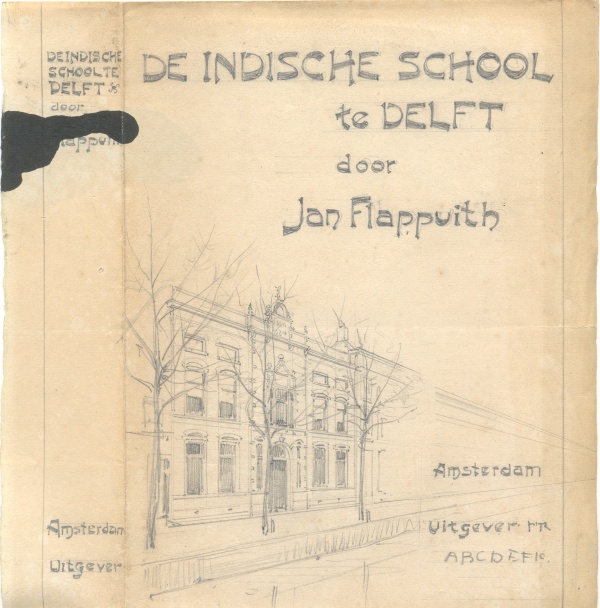