Celebration of the Persian New Year!

On 21 March many people all over the world celebrate Nowruz, the Persian New Year. On this festive occasion I would like to bring some beautiful pieces from the Leiden University Collection to your attention.

This beautiful Persian court scene is part of a set of 247 watercolours. They were collected by Albert Hotz during his travels in Persia. Albert Hotz (1855-1930) was a Dutch entrepreneur who worked and lived in Persia from 1874 until 1884. During his stay he grew fond of the country and its culture. He collected books about the region and took many photographs. His collection of books and photo albums has been part of Leiden University Library since 1935. In 1994 Charles Haccius, a grandson of Albert Hotz, donated the watercolours to the Library. These watercolours from the Qajar period were made in the second half of the nineteenth century. They depict a wide range of topics such as Qajar court interiors, open-air festivities, portraits of ancient Persian kings and heroes associated with the Shahname (the Persian Book of Kings) and pictures of everyday life. The objects are painted on different kinds of paper, loose leaves and bifolios which vary in size, and show various styles and detail in painting. By which artist or workshop the watercolours were made is unknown.

When the watercolours were handed over to the University Collection they were kept in a briefcase stacked on top of each other. Inevitably, the majority of the objects were in a bad state. Some of the watercolours were more damaged than others but overall handling was not possible without the risk of further damage. A conservation and rehousing project was needed to prepare the objects for study and future use. The project started in November 2016 and finished only recently. For the duration of the project I was working at Leiden University Library as a conservator-in-training. Together with the curator of Oriental Manuscripts and the head of the conservation laboratory a treatment plan was made. The goal of the conservation treatment was to increase accessibility for future users and minimise the risk of further damage during storage and handling. At the same time the project was a great chance for me to gain more hands-on conservation experience and to work on a larger rehousing project.

A damage assessment showed that pigment loss and tearing and discolouration of the paper were some of the major problems. The treatment consisted of removing surface dirt and paper repair. Corners were unfolded and tears were repaired with Japanese paper and wheat starch paste. To minimise the risk of further damage during storage and enable safe handling of this collection all of the 247 watercolours were rehoused. The bifolios were unfolded to avoid further migration of the chemically instable pigments, and a folder for every single object was made using paper of archival quality. The risk of dirty fingerprints or tearing of the paper during handling is thereby minimised. The folders will at the same time protect the objects from each other; they act as a buffer, preventing migration of pigment and binding medium between the watercolours.

Now that the conservation work has been completed and the watercolours are safely stored I foresee a bright future for them. Happy Nowruz!

Post by Juliet Baines, Book and Paper Conservation student at the University of Amsterdam. From November 2016 until March 2017 she worked as an intern in the conservation laboratory of Leiden University Library as part of her post-MA training programme. 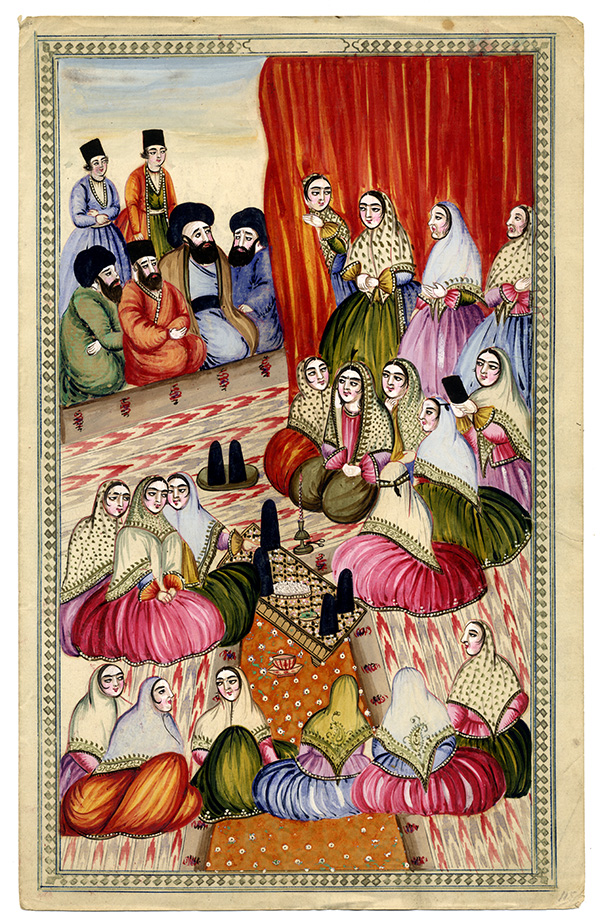