After a ceiling painting by Charles Le Brun in Hôtel Lambert, Paris. The hotel is registered on the UNESCO World Heritage list. In the night of 9 to 10 July 2013, a disastrous fire partly devastated the property.

​Fire in the Hôtel Lambert in Paris
The Hôtel Lambert in Paris is considered as one of the finest examples of seventeenth-century French architecture, registered on the UNESCO World Heritage list. In the night of 9 to 10 July 2013, a disastrous fire partly devastated the property. As a consequence, not much is left of the recently restored decorations by Eustache Le Sueur in the Cabinet des Bains; the famous paintings by Charles Le Brun in the Galerie d'Hercule were severely damaged by smoke and water.

Restoration project of Le Brun by Bernard Picart
A small consolation is that in the eighteenth century a series of prints after the paintings were issued which could, together with the photographs, serve as a visual help during the restoration. The project was initiated c. 1690 by Bernard Picart (1673-1733), a French engraver who permanently settled in Amsterdam in 1710. The drawings after the paintings were made by himself when he lived in Paris, but the prints were largely manufactured in Amsterdam by various engravers. Right from the start, Picart worked with great dedication on La Galerie de monsieur le Président Lambert. The complete work was published in Paris only after his death, by his friend and colleague Gaspard Duchange, who bought the copper plates from the auction in 1738.

The Galerie d'Hercule after Le Brun, however, saw the light of day as early as 1720. It is a series of thirteen prints depicting the ceiling, a title page, and a dedication, issued by Picart in Amsterdam, while Gaspard Duchange distributed it in Paris.

Preparatory drawings
One of the preparatory drawings on the basis of the second compartment of Le Brun’s paintings is kept in the Special Collections of the UBL (PK-T-1721). It is an attractive red chalk drawing, heightened with white on some places. The drawing is signed at the lower centre ‘B. Picart del.[ineavit] 1709 ‘ and at the lower left ‘C. le Brun pinx.[it] ‘.He probably used it to transfer the image to the copper plate, as becomes evident from traces of squaring. 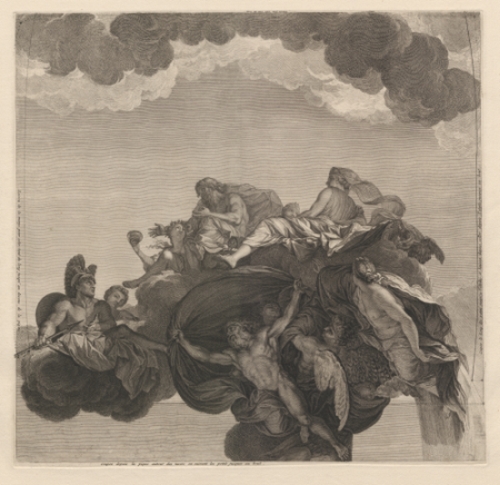 The drawing shows the part of the ceiling in which, flying on a cloud in the company of his wife Juno, is presenting their daughter Hebe, cupbearer of the Gods, to Hercules, who is to marry her. The cloud is borne by Aeolus, ruler of the Four Winds who are helping him by blowing it forth. Behind Juno is Diana with a crescent on her head. Venus is supporting the cloud with her left hand. At the upper right and below the image we see the sketchy outlines of other parts of the compartment of the ceiling.

Picart made his drawing as accurate as possible directly after the ceiling painting. However, Le Brun's robust manner of working has given way to a more elegant form of classicism, a distinctive feature of Picart’s draughtsmanship.

Blog post by Nelke Bartelings, lecturer at the History of Art Department of Leiden University