Manuscript HEM 26, whose title can be translated as Lecture notes on Greek antiquities by the renowned Mr Tiberius Hemsterhuis, is one of more than 850 lecture notebooks kept at the Leiden University Library. This beautiful collection contains important sources for the history of the university. Indeed, lecture notes by Leiden students form the major part of this collection, but there are also those taken by students from other universities, such as Amsterdam, Duisburg, Franeker, Louvain and Utrecht.

This two-volume manuscript, by an anonymous student, contains notes from a lecture given by Tiberius Hemsterhuis (1685-1766), a professor of Greek who had taught at Franeker before his appointment at Leiden in 1740. Greek was taught at the Faculty of Arts. All students took elementary classes there before qualifying for one of the three higher faculties: law, medicine or theology.

The collection includes a total of no fewer than twelve lecture notebooks from lessons given by Professor Hemsterhuis, five of which are concerned with Greek antiquities. This one is special because it is one of the rare manuscripts from the collection where the student, after completing his text but before binding it, added a frontispiece in both volumes. This engraved title page consists of an oval centrepiece – where the student would write the title – set in a cartouche with flowers and fruits, on top of which, left and right, sits a mythological figure with a laurel wreath, blowing a trumpet. At the bottom, the print seller or publisher is listed (Philip Bonk). The names of the craftsmen (illustrator Fox and engraver N. v.d. Meer, probably father or son Noach van der Meer) appear in small letters in the engraving. Without having read a single word of the text, this frontispiece already tells us a great deal about the history and context of the manuscript it accompanies.

Post by An Smets, Team Leader of Western Collections and Information Specialist at the Heritage Collections of Leuven University Library, and 2012 Elsevier Fellow at the Scaliger Institute. 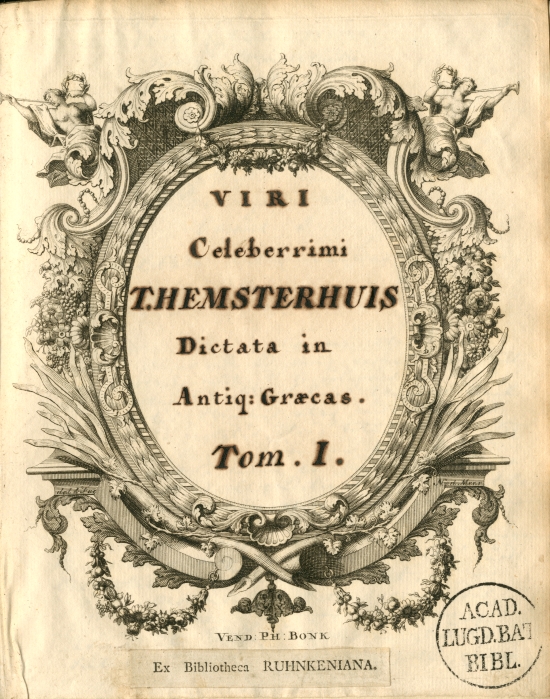