Liquidation of a ‘Reading Museum’ in Leiden

A recently discovered circular letter from 1826, sent by the Leiden professor of Theology Johannes Clarisse to the ‘gentlemen members of the now extinct ‘Reading Museum’ at Leiden, testifies to the end of one of the city’s first reading societies.

The first reading museum in Leiden

In the mid-nineteenth century reading museums were present in almost all the major cities of the Netherlands. Here, after paying a membership fee, one could read books, magazines and newspapers in an atmosphere most resembling that of a gentlemen's club. Women were generally not welcome. The first reading museum in Leiden was founded in 1819, modelled after those in Rotterdam and Amsterdam, on the initiative of seven notable citizens. Arrangements were made with the bookseller Johannes van Thoir to house the museum in his home on the Nieuwe Rijn. In 1821 the museum moved to Breestraat 113, where the bookseller and publisher Christiaan van der Hoek had settled. These new premises offered proper accommodation “open from 10 in the morning until 10 in the evening, properly lit and well heated in winter. – Being suitable for sociable conversation, and reading of distinct political domestic and foreign newspapers and periodicals, and of all the most distinguished scholarly, and in all areas of knowledge excellent, journals […]”, according to a notice from 1822 (PORTEF 130: 20).

Liquidation and plans for a new reading society

However, sociable conversation came to an end in 1825, according to a letter of Clarisse, dated March 28, 1826 and kept under shelf mark BPL 3100. The board of the reading museum were forced to “dissolve and liquidate” the museum. The debt that remained open after settlement amounted to more than 193 guilders, which, according to Clarisse, would not be covered by selling the “mostly defective journals” and the “few and poor items of furniture”. The offer of the fellow professor (of Law) Hendrik Willem Tydeman, which Clarisse submitted to the members of the reading museum in this letter, must therefore have come as a relief. As curator Legati Thysiani, Tydeman offered to take over the debt; in return the newspapers and journals were to be joined with the collection of the Bibliotheca Thysiana at Rapenburg. Clarisse and the other board members of the reading museum considered it fair to ask the members for approval. Ultimately, the letter was signed by 21 members, among whom famous and prominent figures such as J.T. Bodel Nijenhuis (director of publisher Luchtmans), L.C. Luzac (a lawyer) and C.G.C. Reinwardt (professor of Botany). After the liquidation of Leiden’s first reading museum there was still a need and desire for such a facility, as becomes clear from the closing words of the letter in which Clarisse informs that there are plans to start “a new reading society for foreign scholarly journals”. 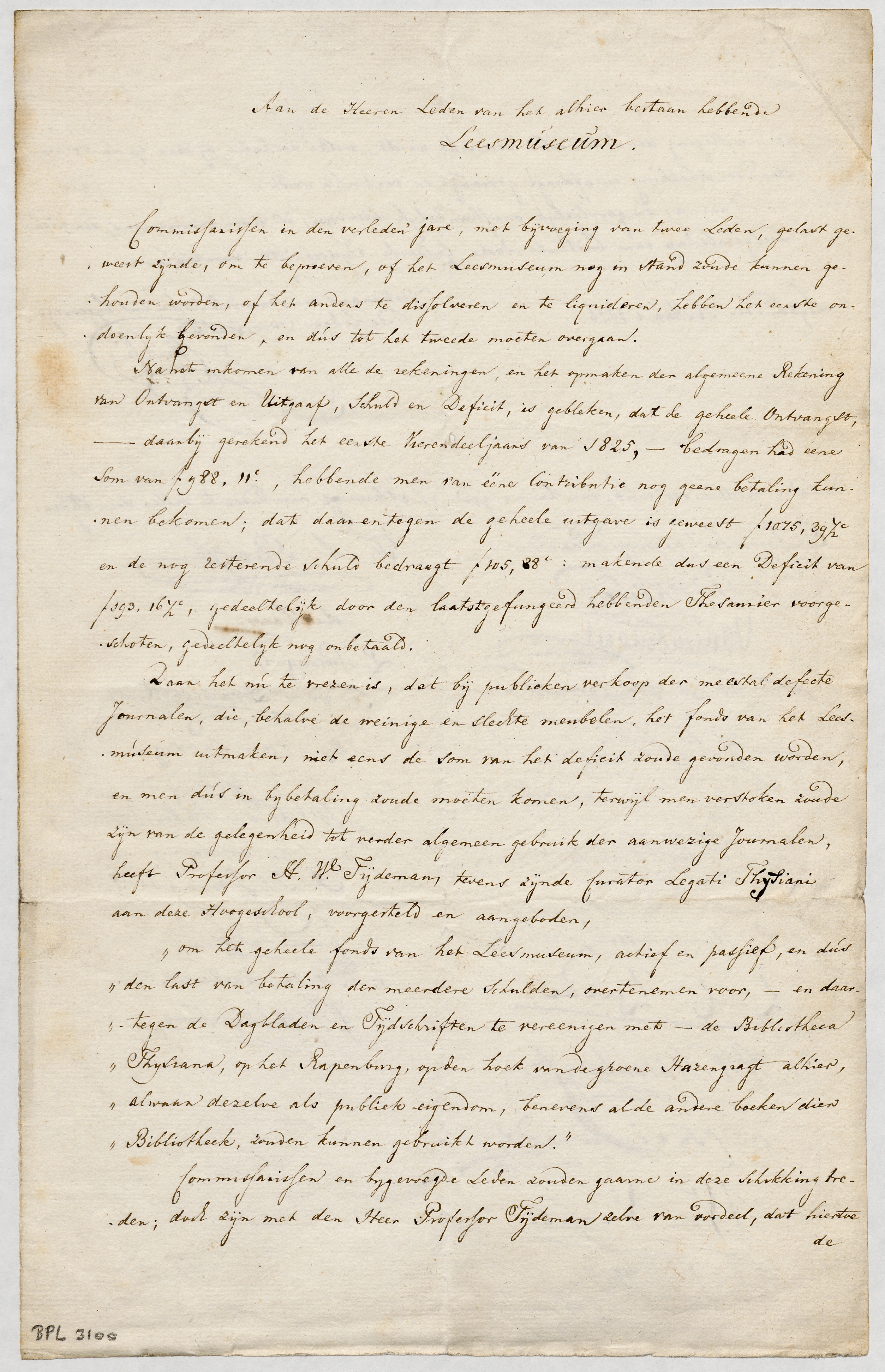 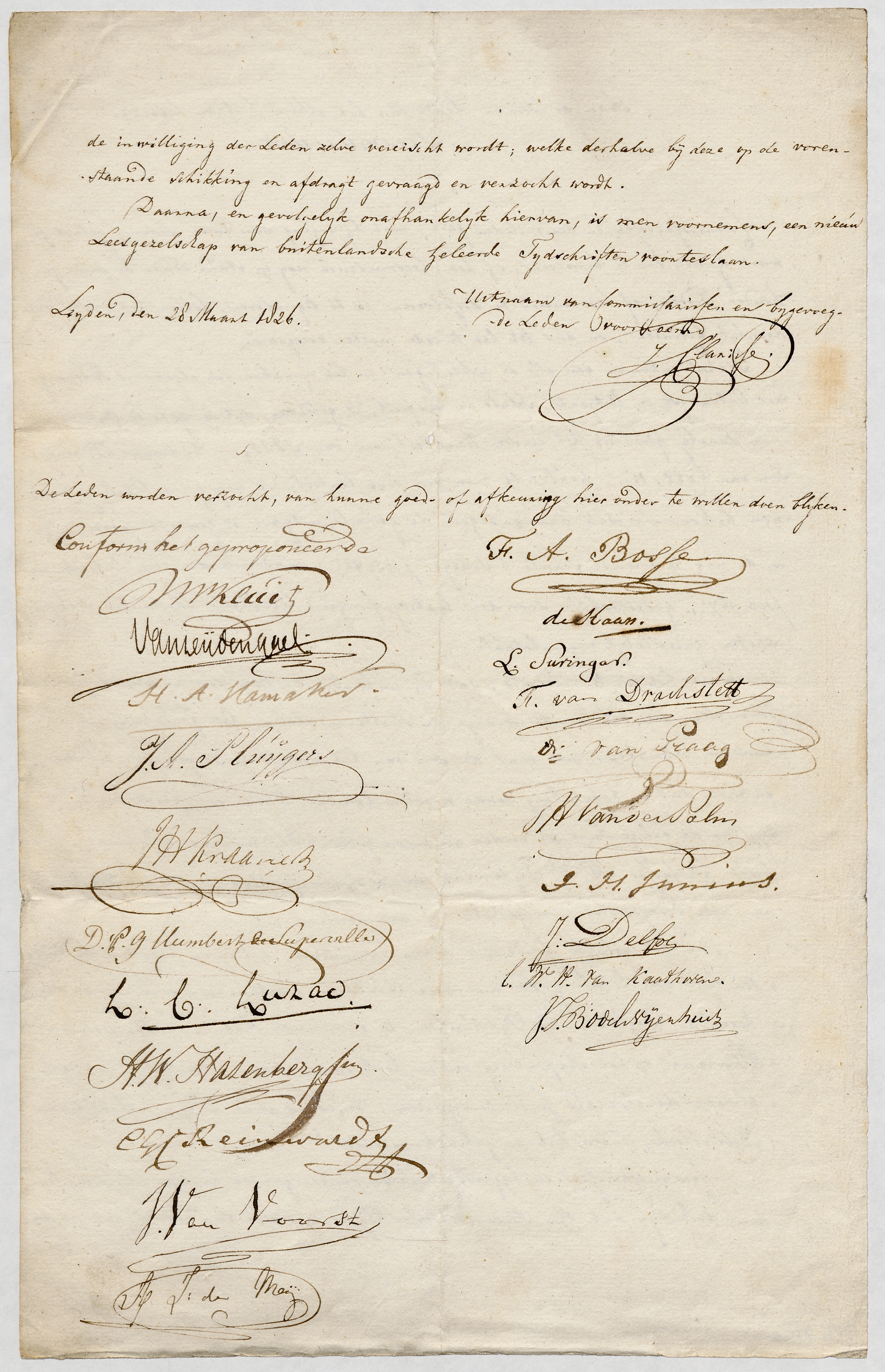