Nowadays, mapmaking is an almost completely digital affair. Modern cartography takes place in a digital environment where different sets of geographical information, or geodata, are stored in layers that can be combined in geographical information systems (GIS). A digitized old map can be incorporated as a layer in GIS as well. Therefore we run a crowdsourcing project Maps in the Crowd to georeference (adding coordinates to) our cartographic collection. However, cartographers tend to work with layers of information for centuries, although their possibilities in comparison with their colleagues of today were limited. One way of working with layers of information in mapmaking was the use of flaps.

In the cartographic collections of Leiden University Libraries, we find several cartographic items with flaps. One example is the hand-drawn fortification plan of the VOC stronghold Bimilipatnam on the Indian Coromandel coast, where flaps with plans of the first floor of the buildings within the walls are pasted over the plans of the ground floor of these buildings (see blog: A disastrous fortress). Another example is a news map of the Great Fire in London of 1666. That city plan indicates the area that was destroyed by the fire. A flap on top of this area shows a proposed plan to rebuild this part of the city. 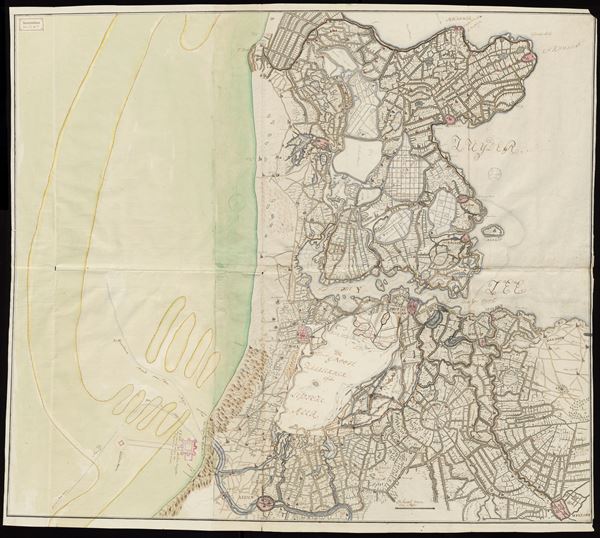 One of the most extreme maps with flaps is a hand-drawn map of the northern part of Holland. This map was drawn in, or shortly after, 1778 by Joannes le Francq van Berkhey (1729-1812). Berkhey was a Dutch scientist, naturalist, painter and poet. In 1773 he was appointed lector in natural history at Leiden University. In 1778 Berkhey compiled an improved and newly engraved copy of a famous map of northern Holland by Joost Jansz. Beeldsnijder, originally published in 1575. Berkhey’s re-edition can be considered as an early form of reproduction or facsimilation. In the collection a copy of Beeldsnijder’s map is kept (edition of 1608) as well as Berkhey’s map of 1778. Of Berkhey’s map, the library also has a proof print on which the lettering below and in the cartouches is still lacking.

Initially, Berkhey’s intention was to indicate the dates when the lakes in northern Holland were reclaimed. He finally decided not to, because it would lead to confusion and affect the original design of Beeldsnijder’s map. Berkhey was also engaged with the compilation of a map of the Haarlemmermeer (Lake Haarlem). He studied its development over time, since the lake’s tendency to grow larger over the centuries because of flooding and bank erosion. Already in the seventeenth century serious attempts were made to reclaim the lake. It was not until 1852 that the lake would be drained. Berkhey collected historical maps of the region, among others by Menso Alting, Joost Jansz. Beeldsnijder and Melchior Bolstra. With the information from these maps he compiled his own hand-drawn map of the lakes and polders in northern Holland, with Beeldsnijder’s map as base. Berkhey wrote in 1789, paraphrased: “I cut out the contours of the Haarlemmermeer from Beeldsnijder’s map and measured the old lakes with paper models, based on the best maps, of which I copied the outlines of the lake in ancient times. I pasted this in the cut out space and designed a second situation of the lake, after a map of 1531. On this I placed a third known situation of the shores of the lake in 1591, according to Beeldsnijder’s map, and finally I added the contours of Bolstra’s map of 1740 with indications of the increase and decrease of the shoreline.” 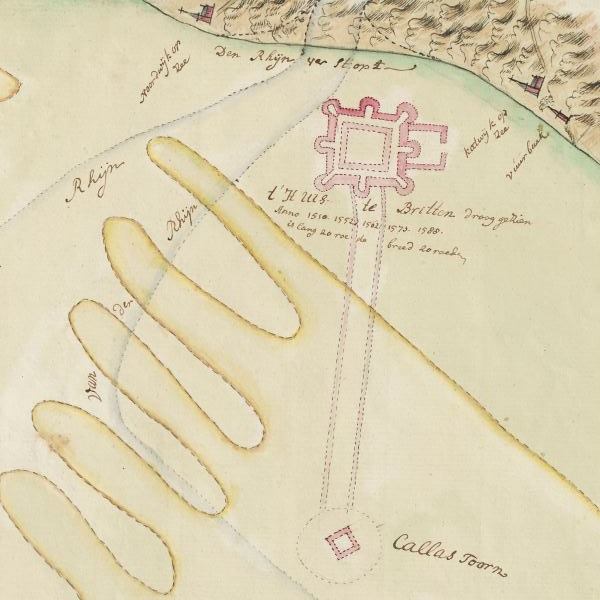 Apart from the five layers of the depiction of the Haarlemmermeer, Berkhey added flaps of the others polders in the northern part of Holland, that were still lakes in the time that Beeldsnijder made his map, to this manuscript copy: Waardpolder, Heerhugowaard, Schermer, Stermeer, Beemster, Wormer and Purmer. Moreover, Berkhey extended the outline of Beeldsnijder’s map to the west, to indicate the more westward historical coastline and mouth of the river Rhine. In this part he also drew the location of the Roman fortress Brittenburg and even the more westward located Tower of Kalla, a lighthouse named after emperor Caligula.

Altogether, this manuscript map by Le Francq van Berkhey is a very interesting layered document on which the author combined information from various cartographical sources: a beautiful early example of historical-geographical research.