Neglect of duty by a Batavian naval officer

"Do I travel to The Hague to lose my health in some cell, or do I flee to Britain which will probably raise the hateful suspicions even more?"

In August 1799 the fleet of the Batavian Republic suffered a heavy blow. A large British invasion fleet had set sail for the head of North Holland. The British superior strength forced the Batavian fleet, which lay off the coast of Den Helder, to retreat to the Vlieter, a waterway connecting the Zuiderzee and the North sea. But communication between the Batavian ships was poor, vice admiral and commander Samuel Story showed little decisiveness and on several ships the crew started a mutiny. Before the British had fired a single canon, the Batavian fleet surrendered.

This Vlieter incident did not remain without consequence for the officers involved. One of whom was Cornelius de Jong van Rodenburgh, who, awaiting his trial, was imprisoned between November 1799 and October 1800. He was ultimately banished because of ‘grossly neglecting his duties’. During his imprisonment De Jong corresponded extensively with his wife. The letters he wrote to her now form part of letter book BPL 3012.

One of the first letters is dated 24 October 1799. De Jong was on the island of Texel, at the time British territory, and had to make perhaps one of the most important decisions in his life: do I travel to The Hague to ‘[lose] my health in some cell’, or do I flee to Britain ‘which [will] probably raise the hateful suspicions even more’? He wrote to his wife not only to inform her about his predicament, but also in order to try and convince her, and perhaps also himself, of his innocence: ‘Truly my angel, I am so certain of this that, were the same to occur tomorrow, the result would necessarily also be the same’.

De Jong remained on Texel but wasn’t imprisoned. Instead he was banished, but he was allowed to spend his exile in Voorschoten, amidst his family.

Post by Erik-Jan Dros, history student at Leiden University. During an internship at Special Collections he described and studied the letter books of Cornelius de Jong van Rodenburgh 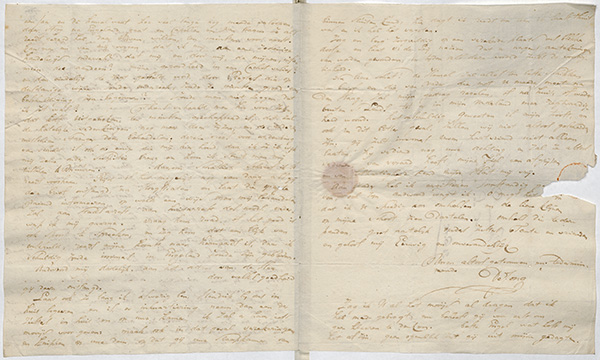