It is common knowledge that there are Muslims in the Middle East, but the presence of many Christians is a story that needs to be retold time and again. There are Orthodox Churches such as the Copts in Egypt, but also communities which accept the spiritual authority of the Pope in Rome. For instance, most Christians in Lebanon belong to the Maronite Church, which is in union with Rome. The everyday language of nearly all Christians is Arabic.

In 1822 a priest from Jerusalem named Isa Petro (‘Jesus Peter’) wrote a popularised synopsis of a number of stories from the Bible, or more specifically Genesis. The Arabic manuscript contains 112 coloured illustrations in a westernized style, which can be explained by the strong influence of European missionaries. This Leiden manuscript (UBL Or. 12.334) was acquired in 1970 for 3,500 guilders, a small fortune in those days.

Not everyone has the text of the Bible at his fingertips nowadays, but this scene from Genesis 8 should still look familiar to most of us: Noah releases a dove from his Ark to see how far the water has retreated after the Flood. After an initial failure the dove returns with an olive branch: a symbol of hope and peace. 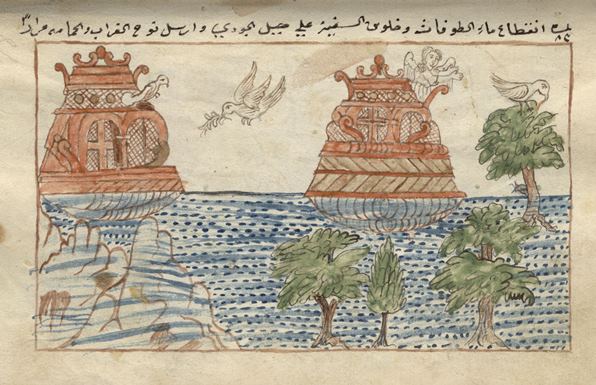