A conspicuous piece of paper tells a great story.

The seemingly infinite number of portico’s (covered arcades, from the Italian portico, pl. portici) that protect modern day visitors to Bologna from rain and other kinds of heavy weather have been a part of the city’s identity for a long time. A prominent position is, indeed, already reserved for the elegant and useful structures on Joan Blaeu’s map of Bologna that was issued in 1663 and included in the Blaeus’ ambitious town atlas of Italy, the Theatrum Italiae, published in five volumes between 1663 and 1682.

One particular portico takes pride of place on this map in a manner that is hard to miss: if leafing through Blaeu’s volume on the Papal State [Theatrum civitatum et admirandorum Italiae, vol. I.1: Civitates status ecclesiastici (Amsterdam: Joan Blaeu, 1663)] one decides to pause and admire the urban layout of Bologna in detail, a paper snippet added on the left-hand side will quickly catch attention. The addition depicts the devotional Portico degli Alemanni, whose construction was finished in 1667, four years after the first three volumes of the Theatrum Italiae had come out. The arcade was built to connect the Via S. Vitale with the Ospedale dei Mendicanti (located in close vicinity to the Church of the Alemanni), assuring its visitors a safe and appropriately ceremonious passage; work on the Portico degli Alemanni had, in fact, been sped up in order for the structure to be ready upon the return of Cardinal Carlo Carafa from Rome, where he had attended the conclave of 1667 which resulted in the election of Pope Clemens IX. 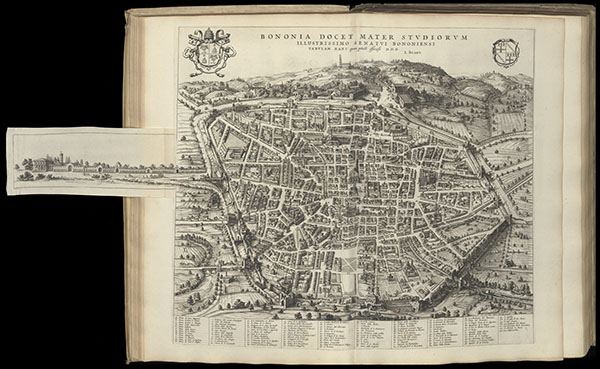 Interestingly enough, the existence of individual, separately issued copies of Blaeu’s map of Bologna on which the start of the portico is drawn in on the side indicates that the paper snippet may well have been meant to complement the map from when it was first published in 1663. In this, the Blaeus were perhaps following recommendations by local Italian contacts, which for Bologna included the philosopher and lawyer Carlo-Emanuele Vizzani and the City Council (Senato). The Bolognese were no doubt eager to show the latest innovations to their city as these were being planned and subsequently implemented. 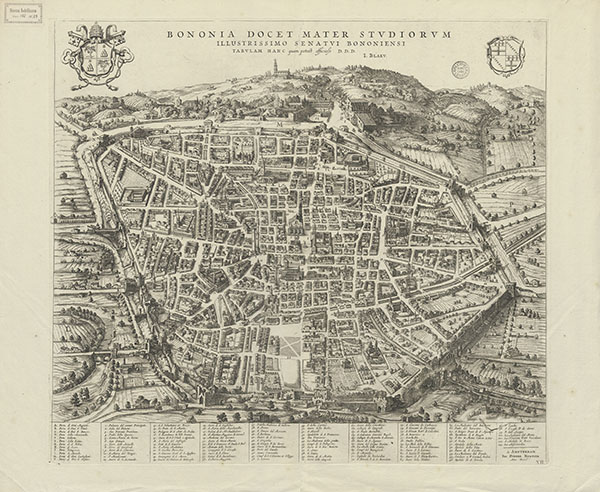 From my own consultation of countless copies of the Theatrum Italiae in libraries in the Netherlands, England, and Italy, all of which present the Bologna map wíth this curious addition, I conclude that the paper snippet was almost certainly added by the Blaeus themselves to all volumes on the Papal State leaving their printing office after 1666, and possibly even earlier: it may have been standard practice from the very start of the town atlases’ publication (1663) onwards.

Though small in size, the conspicuous piece of paper points to the influence of Italian contacts on the appearance of the Theatrum Italiae, and consequently on the way their territories were presented to audiences all over Europe; it thus renders tangible the typically Italian sense of local pride known as campanilismo.

Post by Gloria Moorman, Ph.D. Candidate at the Centre for the Study of the Renaissance, Warwick.