Erasmus wrote one of the most famous books in world literature, Moriae encomium or Praise of Folly.

By the end of the year 1509 Erasmus, after having spent a few years in Italy, returned to England. Tormented by kidney stones and deprived of his books, he tried killing some time by writing a satire that was to become one of the most famous books in world literature, Moriae encomium or Praise of Folly. According to his own words, it took Erasmus less than a week to write, adding that – admittedly – a work of this nature deserved less time than that. The book was finished in the house of Thomas More, whose guest Erasmus was during the first weeks of his stay in England. Fate had it that Praise of Folly became Erasmus’s most widely read book. More so than his edition of Jerome’s work, more than his translation of the Bible, more even than his educational and ethical writings, and more than his Colloquies or Adagia, the Praise of Folly has become the book that keeps its author’s name alive until the present day.

This eulogy of foolishness is without any doubt a brilliant work, presented, appropriately, by Foolishness herself. Who else would praise folly but she herself, the sensible reader might think. But Erasmus has left the reader no choice: the world is held together by foolishness. No-one is spared: the book ridicules ostentation as well as pride and offers severe criticism of scholars, public servants and dignitaries alike. The book was criticized soon after its publication and for centuries placed on the Church’s Index.

The first edition of Praise of Folly had been printed – without Erasmus’s approval – in Paris in the spring or summer of 1511. The first authorized edition appeared in June 1512, also in Paris, and the first translation into English in 1549. Apart from the occasional engraved title-page none of the fifteenth- or sixteenth-century editions had any illustrations. The edition presented here is the famous 10-part Opera omnia, published by the Leiden publisher Pieter van der Aa from 1703 to 1706. The fourth volume contains Moriae encomium and has been illustrated with a series of etchings, which, according to Van der Aa’s prospectus, were made by Jan van Vianen. They were based on the drawings made by Hans Holbein almost two centuries earlier in the margins of a 1515 edition of the Praise of Folly. 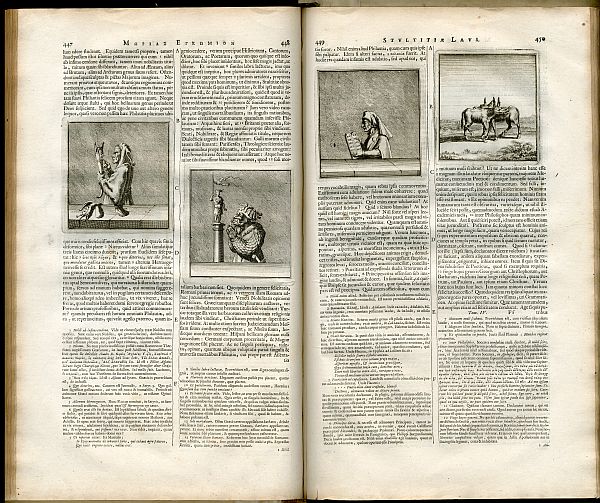