Eloquence and speaking with facility need to be acquired by study and hard work.

The Art of Eloquence

Eloquence and speaking with facility are much wanted qualities in public life; politicians cannot do without. These are not innate qualities, they need to be acquired by study and hard work. Until the end of the nineteenth century it was common for students to be trained in rhetoric or the art of eloquence at school or in university. Several handbooks from classical antiquity were available to them for reference. Apart from the works by famous authors like Aristotle or Cicero, the most commonly used book was the Institutio oratoria by the Roman author Marcus Fabian Quintilian. From the Renaissance on his book was immensely influential and it was essential to the development of artistic and literary theory and criticism as a whole.

Quintilian’s text has been passed down from antiquity in two distinct manuscript traditions; one of incomplete manuscripts circulating mainly in France and one of the integral text, based on Anglo-Saxon manuscripts, but living on mainly in Germany. The Italian humanists were familiar only with the incomplete French versions and so it is understandable that they were jubilant when Poggio Bracciolini discovered a complete manuscript at St. Gallen in 1416. Most of the later fifteenth-century manuscripts are based on Poggio’s copy or on one of its derivatives. Quintilian’s text was printed for the first time in 1470 in Rome. 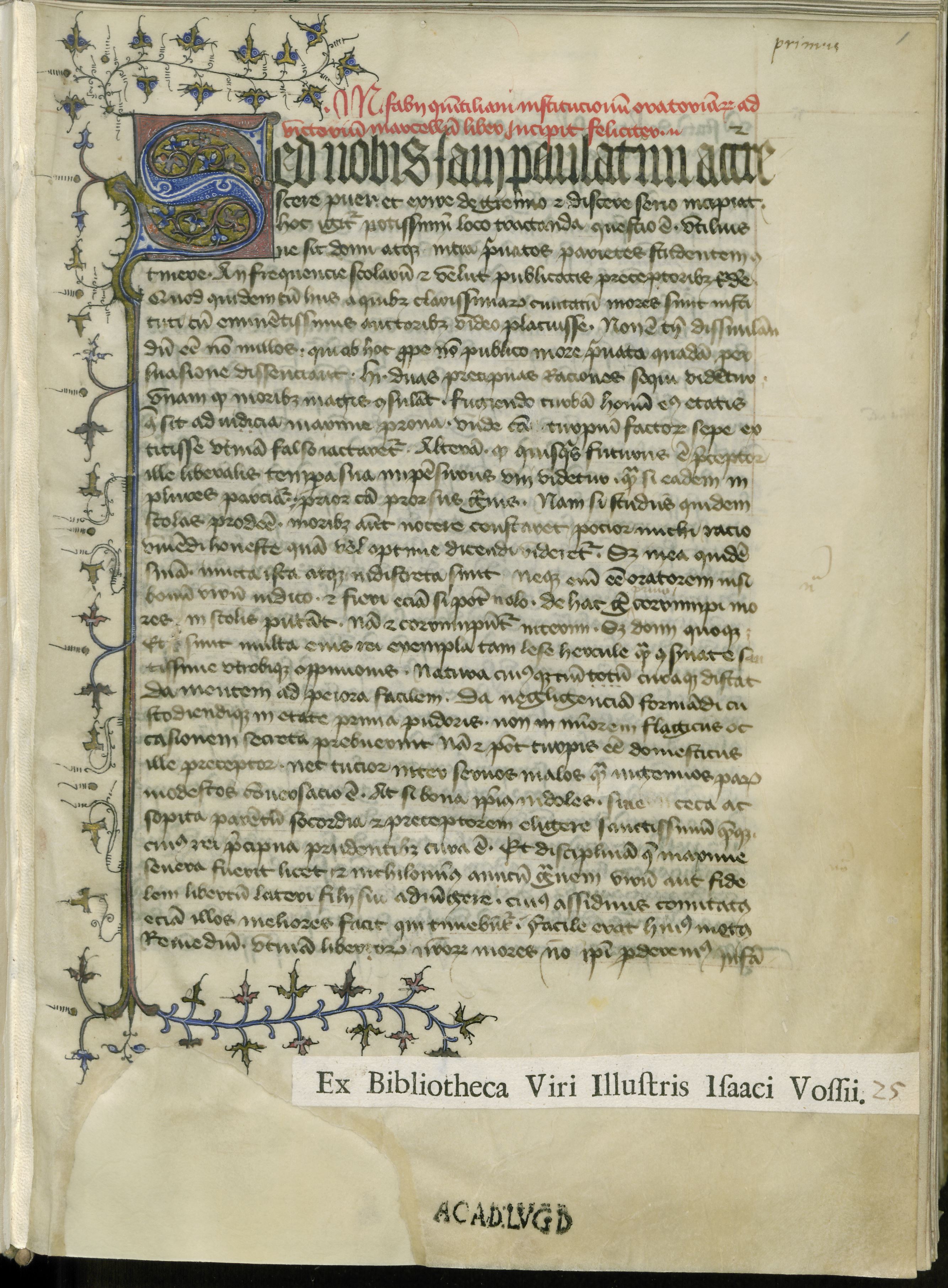 VLF 80 is a French manuscript belonging to the tradition of the incomplete texts, the so-called mutili. Although nowadays irrelevant to the constitution of the original text, it was used by Petrus Burman, professor in Leiden, when he was working on the scholarly edition of Quintilian. That edition was published in 1720 and it was the first critical edition of the Institutio oratoria. The Leiden manuscript VLF 80 is just one of many fifteenth-century manuscripts of Quintilian’s text that have survived. It has been written in an elegant gothic cursiva. The beginning of each of the twelve books is illuminated with characteristic initials and decorative borders, supplemented by pen work and, on the first page, ornamental leaves. Leiden University Library owns more fifteenth-century manuscripts of Quintilian’s Institutio oratoria, four to be precise, plus an older, twelfth-century manuscript, which, however, is very incomplete.