The past year, Leiden Asia Year, the spotlight has been on the Asian collections of Leiden University Libraries. However, also the Western collections contain valuable treasures leading their readers to the Asian continent.

Coen’s journal from 1643 (BPL 2251) features as one of the key objects in the recently published book Voyage of Discovery, marking the opening of the Asian Library:

"On 4 April, the Dutch VOC ships Castricum and Breskens left the harbour of Ternate in Indonesia, and set sail for the seas northeast of Japan to discover islands rich with silver and gold. During the voyage the first mate of the Castricum, Cornelis Jansz. Coen, kept a ship’s journal recording the progress made and the encounters with Japanese fishermen. He also included numerous drawings of the coastlines of Japan seen from the ship.

On 20 May, one and a half month after departure, the two ships lost touch with each other in a storm, just off the coast of Hachijojima, an island south of Tokyo. Due to this setback, the island was named ‘Ongeluckich Eijlant’ [Unlucky Island]. Cornelis Jansz. Coen incorporated several drawings of the island’s coasts in his journal."

Similar adventures and cultural encounters can be discovered in many of the other travel journals kept in the Western manuscripts collection. Let the digitization of a few of these be an invitation to discover them and sail with us to Asia. 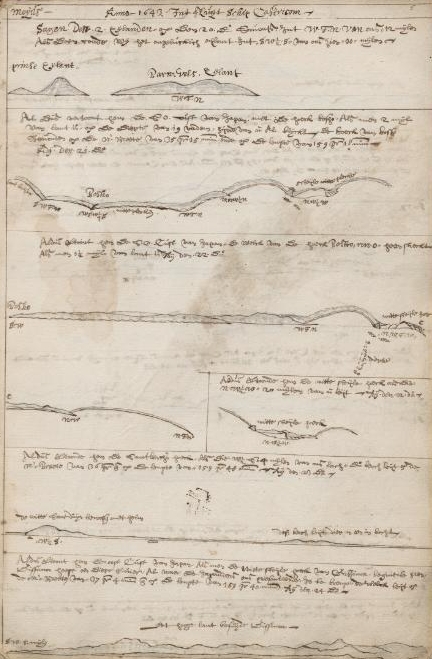