A manuscript written partly on paper and partly on parchment suffered heavily from water damage. The effect is remarkable: it caused severe shrinkage of the parchment leaves only.

The technique of papermaking arrived in Europe fairly late. The art had developed in China and was brought to the Middle East via the Silk Roads. There, the technique had to be adapted since the original source materials to make paper pulp - the bark fibres from the mulberry tree – were not available; instead, flax, hemp and rags were used. This method was brought to Spain by the Moors, around 1150 CE. In Europe, scribes used parchment and they didn’t completely trust the new material, though the Arabs had embraced paper as a valuable commodity, which was easier to make and cheaper than parchment, and paper had already proven its quality over several centuries. But was it as durable and reliable as parchment? Was it possible to produce a strong and functional book with this new material?

One of the ways to deal with this uncertainty was as simple as effective. Scribes combined paper and parchment in such a way that the parchment bifolios were placed in the inner and outer position of each gathering. When the bookbinder then started his work, the needle pierced the gatherings always through parchment first and the thread did not cause too much tension in the paper folds. Others used a parchment leaf as the outer bifolio only, and the bookbinder added a small V-shaped parchment guard to the inner fold-line prior to sewing. Either way, the gatherings from the textblock were protected during the bookbinding process. This practice ceased by the end of the Medieval Period, when paper apparently had proven its worth. (For archival records, however, parchment continued to be used as the more trustworthy material) 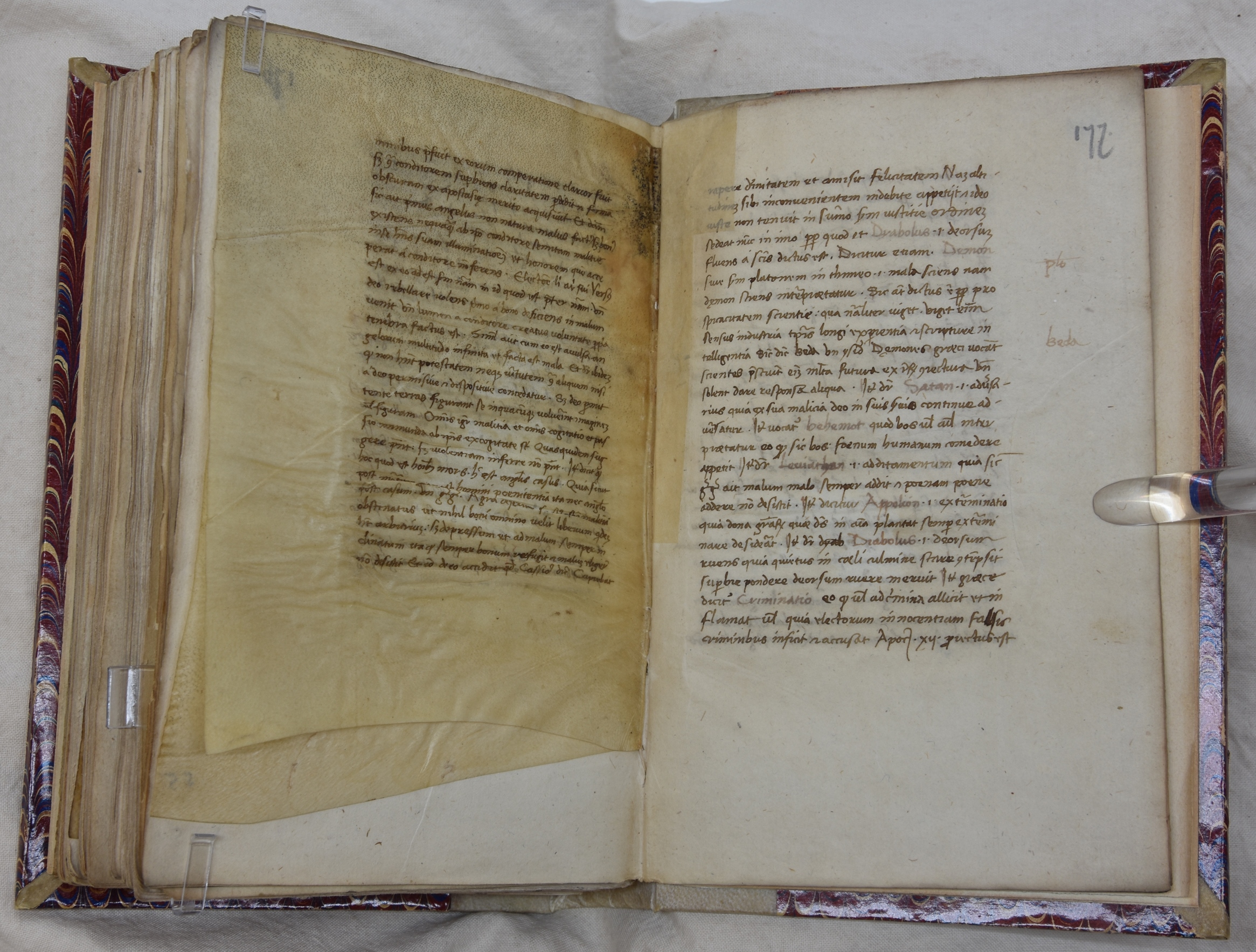 BPL 188, Collection Leiden University Libraries, f. 176v-177r. The opening shows a parchment folio on the left and a paper folio on the right.

The manuscript at hand is a historiography, starting with Paul the Deacon’s extended version of Flavius Eutropius' Breviarium historiae Romanae, dated 1464 and copied in Venice and/or Arqua. It is a typical product from the period when paper was eyed suspiciously but used nonetheless. The compilation of the textblock is not entirely consistent: of the eighteen gatherings, the last twelve are composed of three paper bifolia nested between inner and outer leaves of parchment. The first six gatherings consist of an outer bifolium of parchment and four bifolia of paper. To protect the paper fold-lines of these gatherings, a small parchment guard was applied. The reason for this inconsistency will probably remain unknown. The text is clearly copied in one hand, with a brown iron gall ink using some rubrication. Each page counts 25 lines. The manuscript is bound in half parchment with rigid boards covered with marbled paper; the binding is evidently of later date, even after the manuscript was acquired in 1666.

At a certain point in its history, this manuscript suffered severe water damage. It seems the book was laying on its lower cover when the calamity occurred, since the last pages display the worst damage and the water penetrated the pages from all edges. Had the volume been standing on its tail edge, the water would have most affected the bottom margins. Fortunately, someone rescued the volume and made sure it dried before the moisture caused mould growth. What could not be prevented, however, is that the parchment reacted to the very humid circumstances. It shrunk. It shrunk to a very large extent.

Parchment is made by stretching the hide in a wooden frame while it is dried, scraped and polished. The animal skin is thus stretched to a larger format than it originally was. Insect stings, leaving small holes in the dermis layer, demonstrate this as their size increases considerably. Because of this process, parchment remains vulnerable to climate changes. Moisture will be absorbed by the skin and causes the fibres to swell and contract. The only way to prevent shrinkage is by drying the parchment under pressure or by stretching it, still wet, under tension. The enormous shrinkage these manuscript pages display is a result of the wet condition and tells us the manuscript was dried with the pages fanned out, or at least without the pressure required to keep the pages in shape. 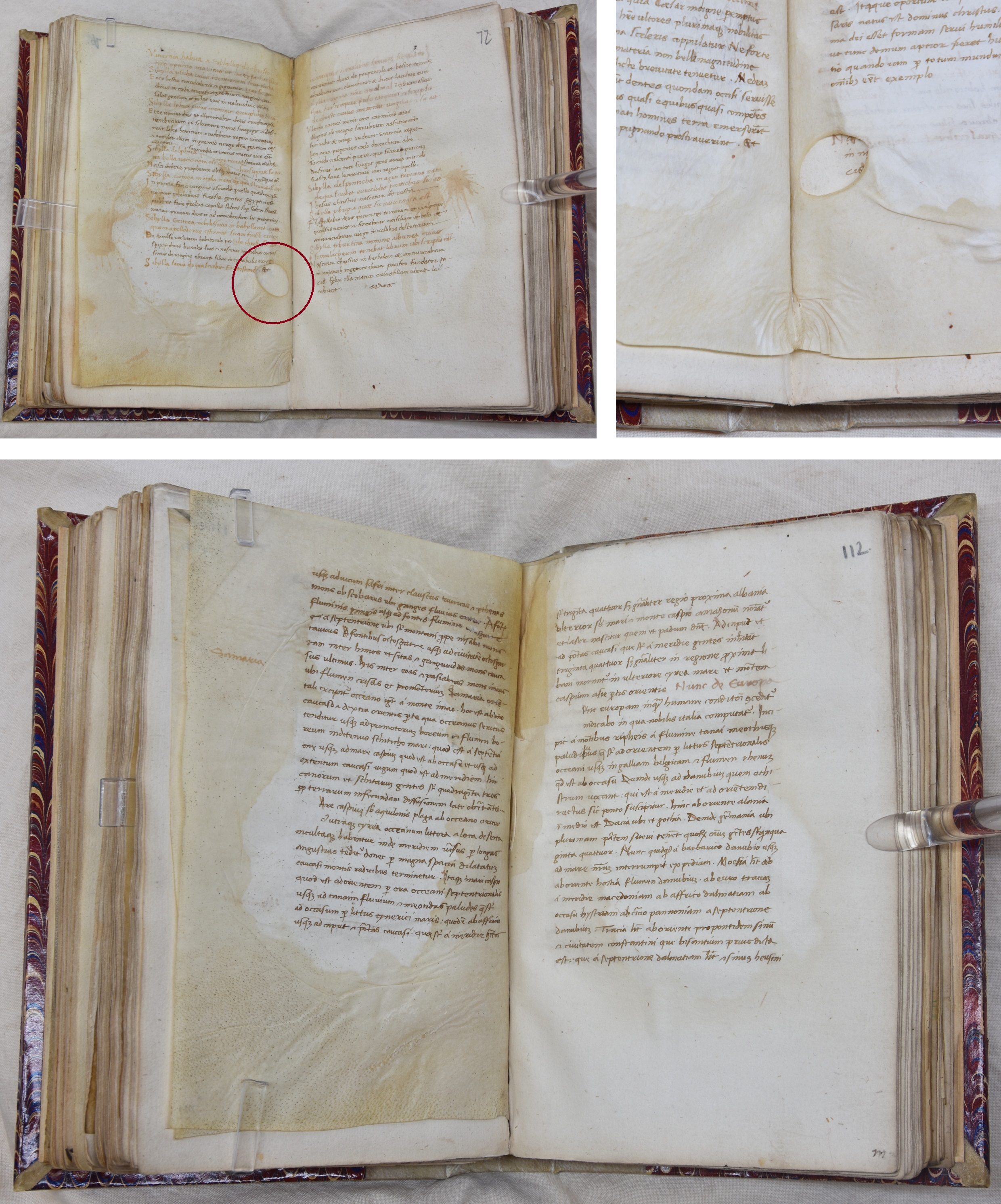 BPL 188, Collection Leiden University Libraries; above: f. 76v-77r with a detail of the insect hole in f. 76; below f. 111v-112r. The opening shows the contrast in shape and colour between the parchment and paper; the water stain is also visible.

The extent of the damage wouldn’t have been so obvious had not part of the leaves been made of paper. The paper pages have not shrunk. Comparing the format of the text panels on these paper pages with the parchment folia reveals the impact of the shrinkage. It also gives us an indication of the possible shrinkage of other parchment manuscripts that have suffered water damage, of which we don’t have other clues to estimate the original format.

The physical change happened hundreds of years ago. Would it be possible to restore the parchment pages to their former appearance? I am afraid not. Firstly, treatment would require dismantling of the manuscript. Given the fact that the structure is sound and functional, this is undesirable. Secondly, stretching parchment as a conservation measure does not equal its original manufacturing process, when it was stretched in the frame before being dried and cut to size. Additionally, the treatment would require remoistening, which is not without risks for the aged parchment fibres, and clasps would have to be fitted on the edges of the pages in order to achieve the tension needed for the stretching process, which may also harm the folia instead of improving them. After all, the manuscript is accessible and can be studied as it is.