Signed in blood by P.C. Hooft

In his letter Hooft declares his life to be in danger as a result of the ‘afflictions’ with which Heleonora reciprocates his love. Pieter Hooft had a sanguine temperament. As a young man he easily fell in love, and as a singer-songwriter avant la lettre he wrote amorous ditties such as:

If with a kiss I would steal
From your eyes, lips and fair neck,
And not slower,
A little lower,
Something plump, then
Playful pussy, what loss would you feel?

In 1627, however, Hooft was alone. His wife Christina had passed away in 1624, after the death of all of their four children. Hooft was not only a poet, playwright and author of historiographical works, but also bailiff of Gooiland and provost of Muiden. This means he had to live at Muiderslot Castle, at least during the summer months. In winter he was allowed to return to Amsterdam, where he and the Bartolotti family were neighbours.In the period preceding the letter of 27 August, Pieter had already been courting Heleonora, but she was still in doubt. Hooft describes how she had asked him for 24 hours to think it over and then still proved unable to make up her mind, saying: ‘I feel so touched by you, I wish I were inclined to marry.’ She even asked him to come over for a trial period. On Monday 9 August she called him ‘my love’, but on Tuesday she found his friends failing in piety.

In his letter of the 27th Hooft goes full throttle one more time. He beseeches Heleonora to open her eyes and heart to see that his letter is drenched in tears and signed in blood. He prays that the kiss she had thoughtlessly given him would not turn out to be a Judas kiss which would send him to his grave. 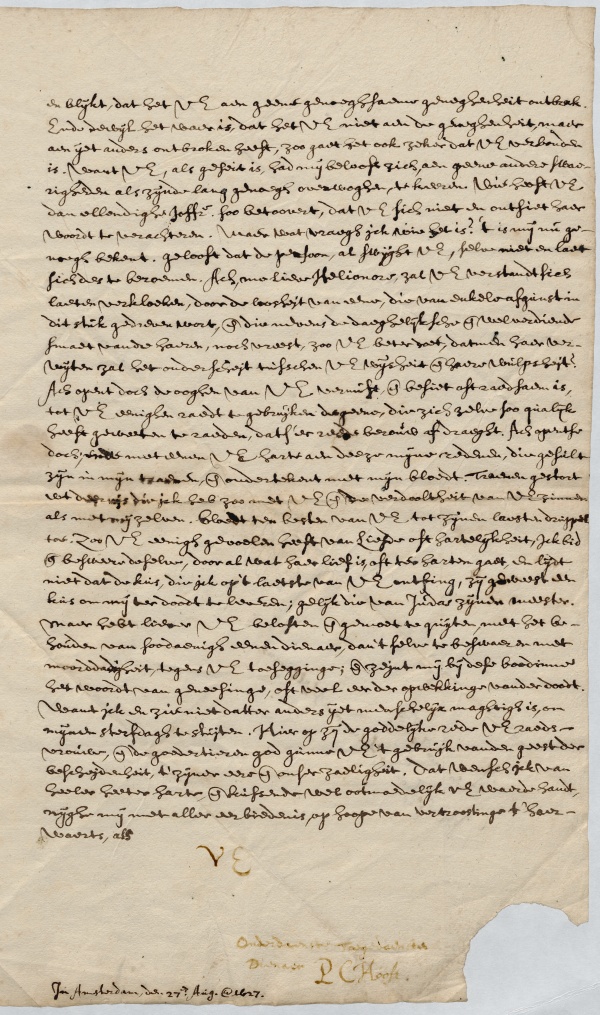 It worked. Heleonora became Pieter Hooft’s second wife and the hostess with whom he would entertain many culturally-minded friends at Muiderslot Castle over the years to come.

It is exceptional that this letter is still preserved in the Leiden University Libraries. To exhibit this fragile object at Muiderslot Castle, however, a deceptively real-looking facsimile was made. Those who recognise it as such will perhaps deplore the loss of historical authenticity, but for the long-term preservation of the original it is a sacrifice well worth making.