The engraving of the Botanical Garden is one in a series of four, the other three depicting the Anatomical Theatre, the University Library and the Fencing School.

They were designed by J.C. Woudanus, engraved by W. van Swanenburgh and published by A. Cloucq. In their composition the engravings are similar, but by no means identical. The compositions appear to be based on a intricately contrived system that governs all four of them.

Each image is symmetrically and geometrically arranged in circles, squares and rectangles with a central viewline. The floorplan of the Hortus is roughly divided into four squares. The image of the garden differs from the others with a decorative trompe l’oeil illustration depicting two gigantic bamboo poles and a frame with natural history objects. This element shows not only the artistic inventiveness and the ambition of its makers, but also that we are here dealing with professional craftsmen who were well informed about contemporary developments in painting and engraving, including the art of visual deception.

The bamboo poles and the naturalia represent the foreground of the garden. Simultaneously, the poles are a support or prop which, as an imaginary backbone, appears to be attached to the engraving with an ornamental knot. Thus it would seem that the artists wanted to create the illusion that the image could be rolled up or unrolled by the viewer, which in 1610 was common practice for prints. World maps or large format prints were usually rolled up around a wooden pole (roller) for easy transportation or safekeeping. The rollers were also used for hanging them on a wall. In this way the creators presented the print of the garden as a map of the world in microformat. The four points of the compass, engraved in elegant letters, also bear testimony to this vision. 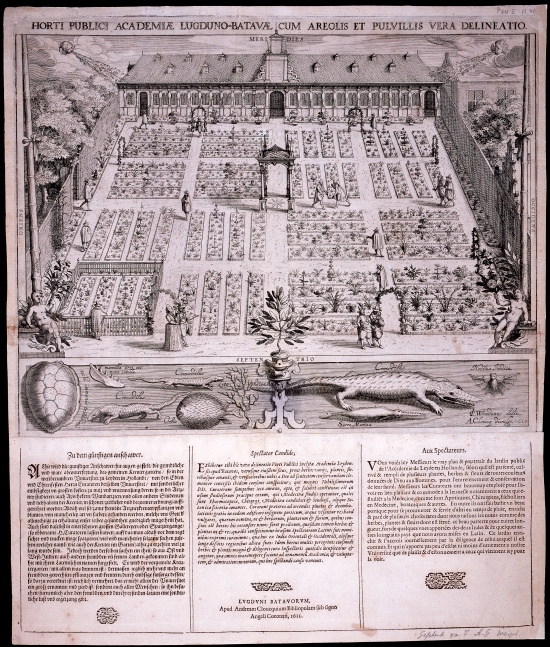 With its exceptional trompe l’oeil, the makers appear to have given preeminence to this print in relation with the other three. Thus it would seem that they envisaged a specific order when devising the series of four: the image of the naturalia in the foreground gives not only access to the world, but also to the rest of the series. Why did they give preference to this print of the garden and how does it relate to the others? This question will be answered in a following blogpost on the print of the Anatomical Theatre.