The chosen people - The relief of Leyden one century later

One-hundred years after the relief of Leiden in 1574, the 'Year of Disaster' ravaged the Netherlands. Karel Crucius (1648-1728) managed to put present hardship in historical context.

On October 3rd 1574, the town of Leiden, beleaguered by the Spanish enemy, was saved thanks to the inundation of the surrounding countryside, which forced the enemy to withdraw. The inhabitants of the town had suffered from hunger and pestilence and one-third of them had died. Those who could, flocked to the church to say thanks to the Almighty God for their deliverance. 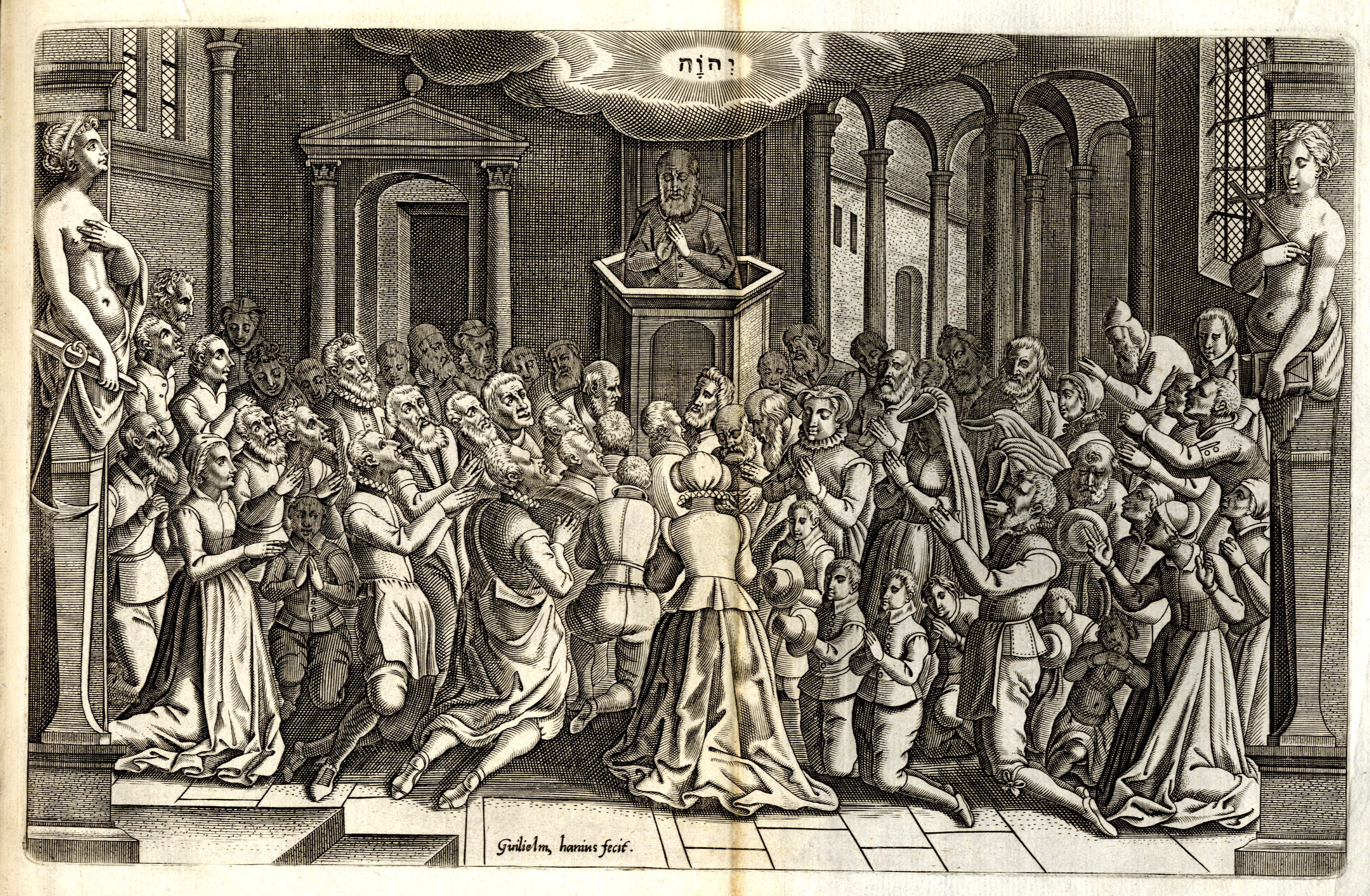 Every centennial of this happy moment in the history of Leiden, as well as that of the Netherlands, is commemorated with poems and sermons, histories and oratories. In 1774, 1874 and 1974 in particular, there were avalanches of printed works. Except for 1674, when only Adrianus Severinus (1649-1678), bookseller and printer in Leiden, published his short and clear (‘kort en klaer’) history of the famous siege and eventful relief of his native town: Het geluckig herdenken aen de vermaerde belegering der stad Leiden. This rather rare book can be found in the Royal Library in The Hague and the University Library of Amsterdam. But it is lacking at Leiden University itself! Who can help us out?

It is not surprising that in 1674 there was less interest in the history of one hundred years earlier. In 1672 the Dutch Republic had been invaded by the army of the French King Louis XIV, who fortunately made his halt in the province of Utrecht. There, in the geographical heart of the country, he was expecting the Dutch merchants to fall on their knees and pray for his mercy. Which they didn’t. In the Northeast of the country, the bishop of Münster besieged the town of Groningen. An invasion on Holland’s coast by the combined fleets of France and England was planned to happen, but the attack was prevented in a masterly way by Admiral Michiel de Ruyter and the Dutch navy. In the history of the Netherlands the year 1672 is known as the Year of Disaster (‘het Rampjaar), and the country seemed set to meet its fateful end. In this new war, thoughts in Leiden were less focused than they might otherwise have been on the siege of 1574 and its fortunate outcome. 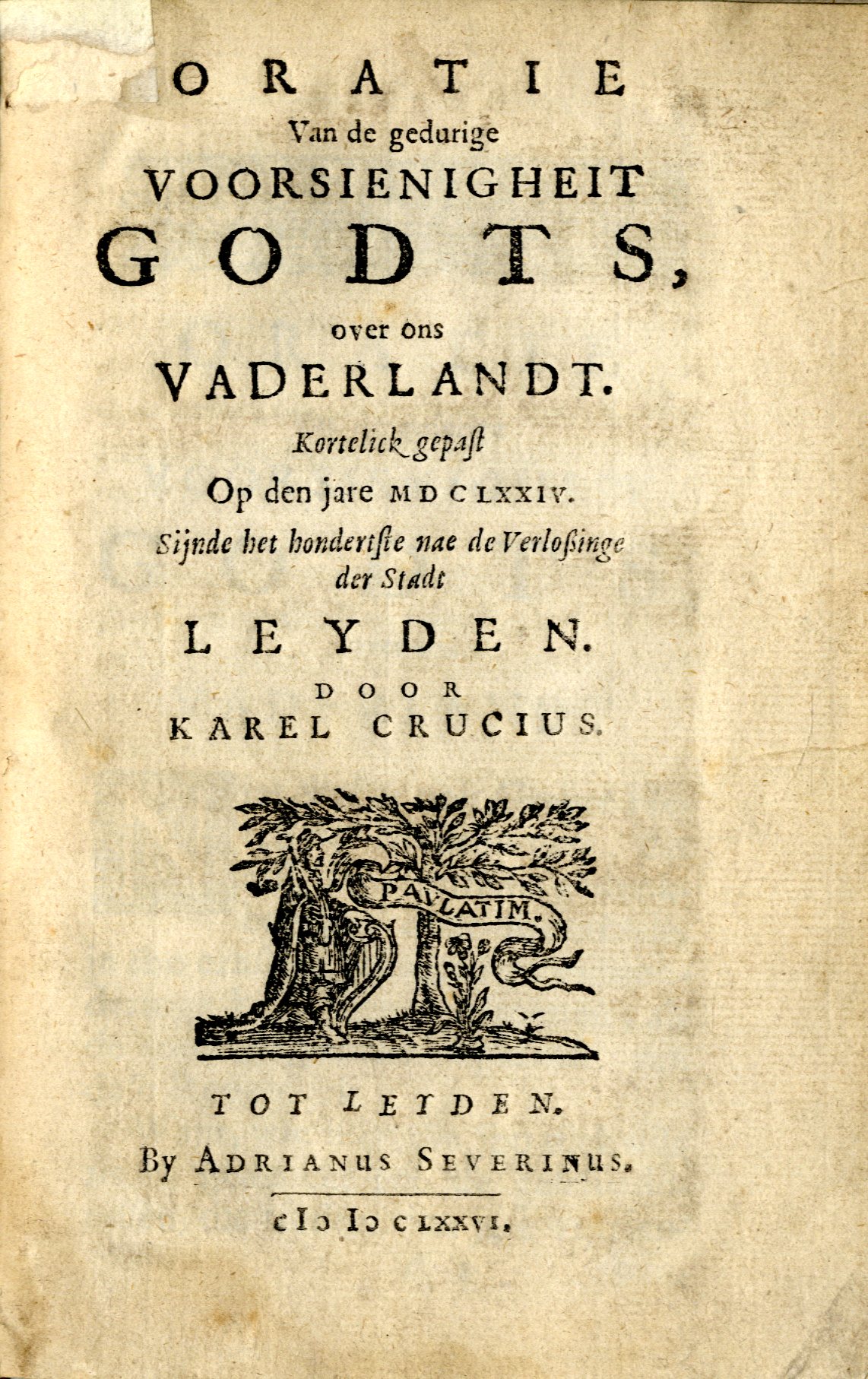 But one could turn this misery into good fortune: by remembering that the Almighty God had once saved his people, and would certainly come to its rescue a second time! Had he ever left his people in despair? No! This firm conviction was expressed by Karel Crucius (1648-1728), member of the council (‘vroedschap’) of the city of Leiden since 1672. His public address to the townspeople in the University’s main hall has been published by the aforementioned Adrianus Severinus. This little booklet is even rarer than the first edition of the book by Severinus himself. Fortunately, the Leiden University Libraries' Special Collections recently acquired a copy of this oratory, so far the only known copy in Dutch public collections. It was published – with roman numerals – MDCLXXVI = 1676. Is this correct? Or has the printer made a mistake and should it be: MDCLXXIV = 1674? Severinus added a poem to the text of Crucius, dated ‘Leiden, den 15. Octobr. 1674’. So we may presume that Crucius delivered his speech probably on the very day of Leiden’s relief: 3 October 1674. 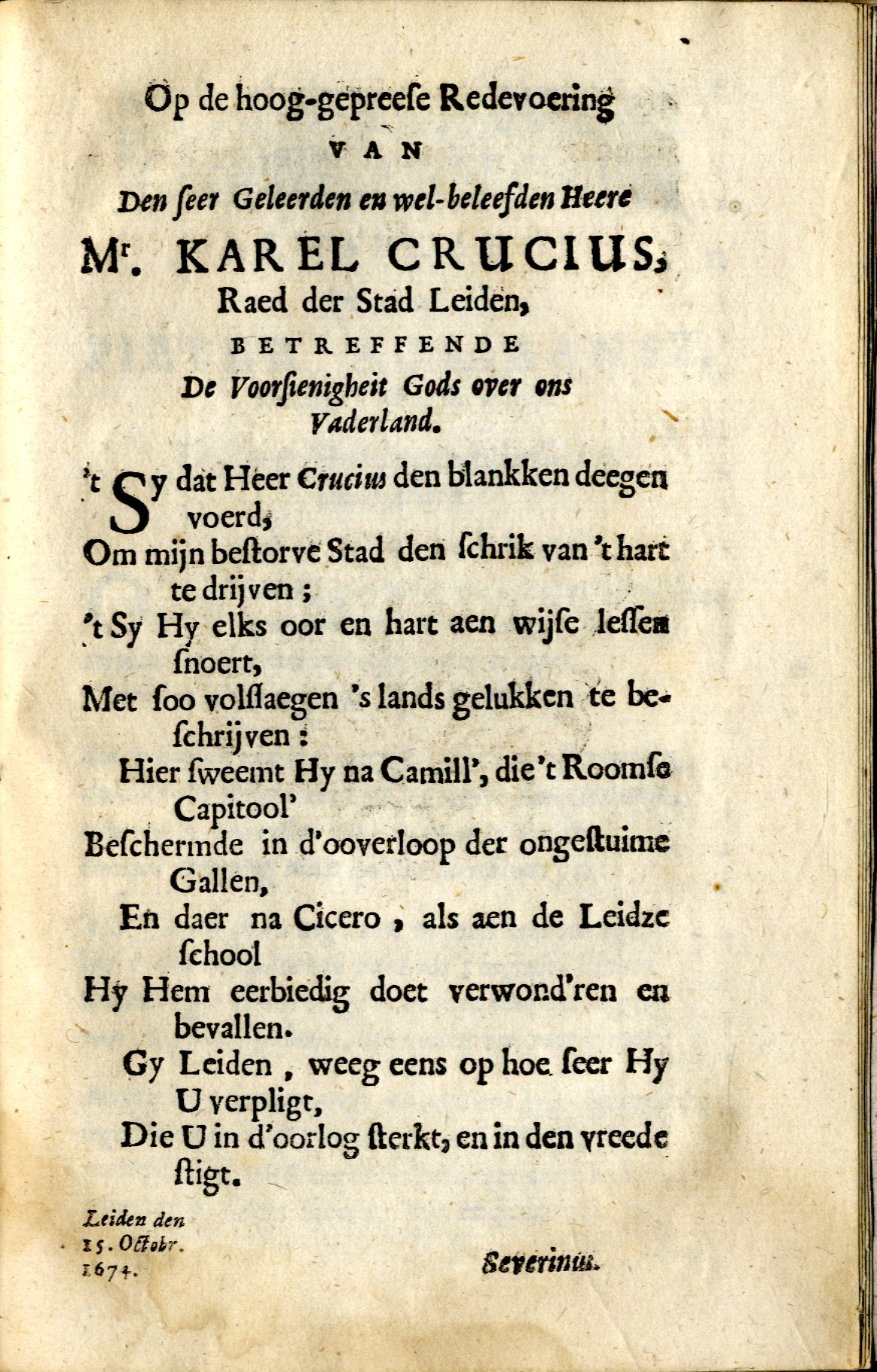 Looking back, Crucius expressed his bewilderment at the rise of the Dutch Republic in this small corner of the earth – a commonplace ever since. After the freedom of the people of Israel, it was the freedom of the Dutch Republic that benefitted most from God’s protection and divine providence. Crucius demonstrated this through the history of the Dutch Revolt and the many memorable events during which God showed his mercy: the seizure of Breda, the Battle of Nieuwpoort, the capture of Den Bosch etc. Then he switched to the then actual war that started in 1672, ‘dat eeuwigh met een swarte kole in onse jaer-boecken sal geteeckent staen’ – which forever would be written with black charcoal in our chronicles. It was God who had prevented the English by way of a long-lasting low tide from invading the Dutch coast. In dithyrambic terms, Crucius praised Prince William III of Orange, who did just what his great-grandfather, William I of Orange had done: saving Leiden and Holland from destruction and destitution. And probably the most remarkable thing of all: he never mentioned the word protestant or catholic, and only talked about the Dutch and their Republic. United we stood, united we stand.