The Night by Heinrich Aldegrever

This woman wants to seduce us, the viewers.

Although Valentine’s Day is prominently being advertised nowadays, the name giver, Saint Valentine, has always remained something of an illusive figure. His love life, to say the least, has remained a mystery and one might say that in general saints find more fame in their deaths than in any amorous flings. To put it briefly, for a better view of love and eroticism, Saint Valentine is not the person to turn to. You might get some insight though from an exhibition at the University Library, on view from March 25 until May 2, entitled Love & Lust – Seduced by the collections of Leiden University (Dutch). Books, prints, drawings and manuscripts will familiarize you with the love life of our ancestors, displaying amorous couples next to Olympian lust, love sonnets as well as pornographic poetry and biblical debauchery opposite plain erotica.

One of the works on view is an engraving by Heinrich Aldegrever (1502-c.1555). A woman is seen lying on an ornate bed, night has fallen, the moon and stars are visible through the window. The woman seems te be sleeping although her position doesn’t strike as very comfortable. It must be a sultry night since the woman is naked and it looks like she threw off the bed sheets. Like a pin-up girl from the sixteenth century the woman shows her body to the viewer, apparently completely uninhibited. 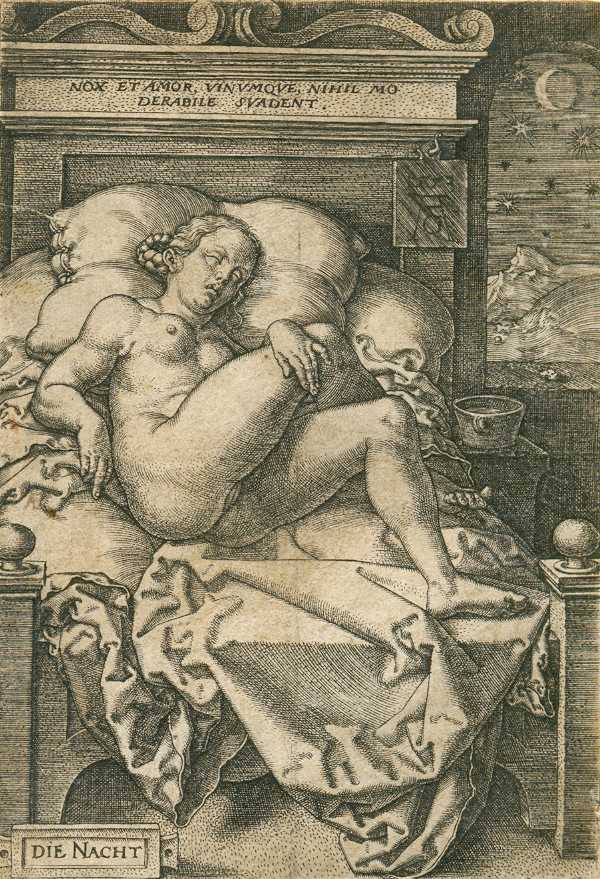 Through a tablet in the foreground, bearing the title Die Nacht (The Night), the woman is being identified as an allegory. A quote in Latin on the head of the bed further increases the scholarly implications of the scene. The quote comes from Ovid’s Amores and can be translated as: Night and love and wine advise no restraint. Is the woman exhausted from a night of drinking and love making? The fact that she is being presented as an allegory cannot conceal the fact that we are dealing here with an overtly erotic image. The unabashed, inviting posture of the woman leaves little room for doubt. This woman wants to seduce us, the viewers.