The price of a mounted photograph by Woodbury & Page

The photographs made by the famous Woodbury & Page studio in Batavia (present-day Jakarta) are well-represented in the photo collection of the Royal Netherlands Institute of Southeast Asian and Caribbean Studies (KITLV) and kept at the University Library. The studio opened its doors in 1857. Woodbury & Page are thus seen as photography pioneers in the Dutch East Indies. The commercial studio was already famous in the archipelago in the nineteenth century. Woodbury & Page made both studio portraits and instant commercial photographs, for example showing landscapes. The average inhabitant and tourist in the colony did not own a camera. Most tourists, therefore, bought pictures of tourist attractions from photographers like Woodbury & Page.

To bring their photos to the attention of a wider audience, Photographisch Atelier Woodbury & Page advertised regularly in the daily Java-bode. On 18 October 1879, the newspaper published a spread containing a list of photographic views and types. The list holds 693 instant images. The archipelago is almost entirely represented, from Sabang to Merauke. In order to facilitate the purchase of landscapes and town views, all photos mentioned in the daily were provided with an order number, for easy reference. The Java-bode reports that unmounted photos can be ordered for fl. 1,50. The costs for a mounted version were fl. 2,00.

A large number of Woodbury & Page photographs in the KITLV collection show the original order numbers by which the images could be ordered. Until recently, these Woodbury & Page numbers were not visible, because the numbers were covered with paper tape. As the adhesive proved to be water-soluble, it was possible to carefully remove the tape. This way, the conservation department has revealed important photographic historical information. The fact that the numbers on the mounted photographs correspond to the order numbers from the Java-bode, shows us that the photos are glued on cardboard by Woodbury & Page themselves. It also becomes clear that the photo prints in the KITLV collection were ordered after October 1879 and were purchased for fl. 2.00 each at that time. It’s not just the images that matter in the collection, it’s the materiality of the photographs, such as cardboards and annotations, in this case, the original numberings, that give valuable information on the pictures and their history. 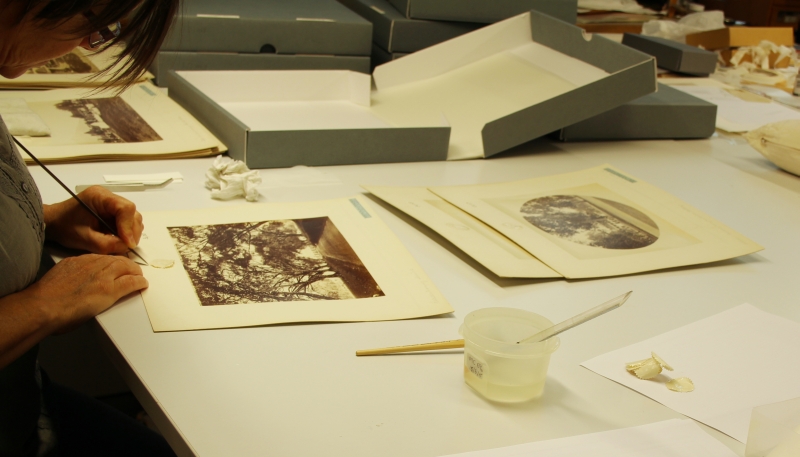 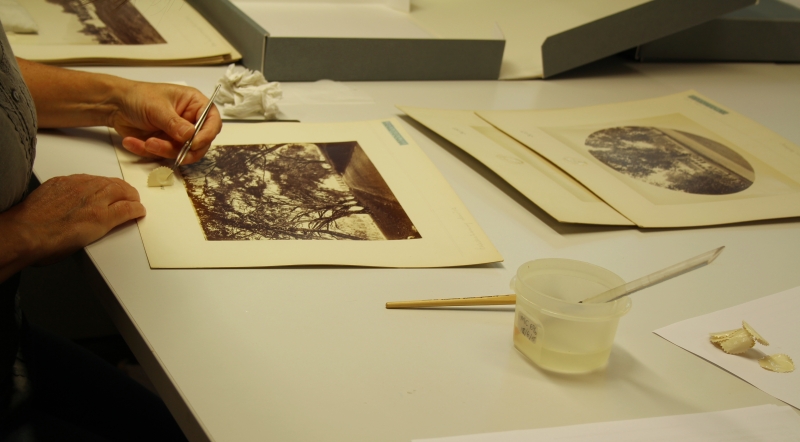 Karin Scheper is a conservator at Leiden University Libraries.