The Quran of an 'Achehnese Priest Killed in Action'

In March 1873 the Dutch colonial army stormed the Great Mosque of Kota Radja (Banda Aceh) and took this richly illuminated Quran as spoils.

In 1873 the Dutch invaded the independent state of Acheh, North Sumatra. In March, the colonial army launched a large-scale attack on the Great Mosque of the capital Kota Radja (now Banda Aceh), which was fiercely defended by the Achehnese. The building was set ablaze by gunfire. Inside, a certain J.H.A. IJssel de Schepper, an infantry captain, found a Quran on the body of what he presumed to be 'an Achehnese priest killed in action’. He first took the manuscript to his bivouac on the coast but afterwards, on 27 April 1873, decided to send it to Michael Jan de Goeje, professor of Arabic at Leiden University. De Goeje instantly passed it on to the University Library, where it was registered as Or. 2064..

This ‘most remarkable object’ as the Leiden daily newspaper Leidsch Dagblad called it in its edition of 9 July 1873, is beautifully illuminated on the opening and final pages in red, black and gold. The red full-leather Oriental binding with its typical flap is blind-tooled with delicate ornaments. Tradition has it that the manuscript is stained with blood, but this has never been ascertained. But blood or no blood, this Quran is a silent witness of the brutality of the Dutch colonial regime in Indonesia.

The high-resolution scan of this manuscript was made by the digitisation company of Dr. Harald Fischer from Erlangen, Germany, and kindly donated by him to Leiden University Library. This Achehnese Quran with its turbulent history can now be consulted in its entirety on the Digital Special Collections website [UBL. Or. 2064] 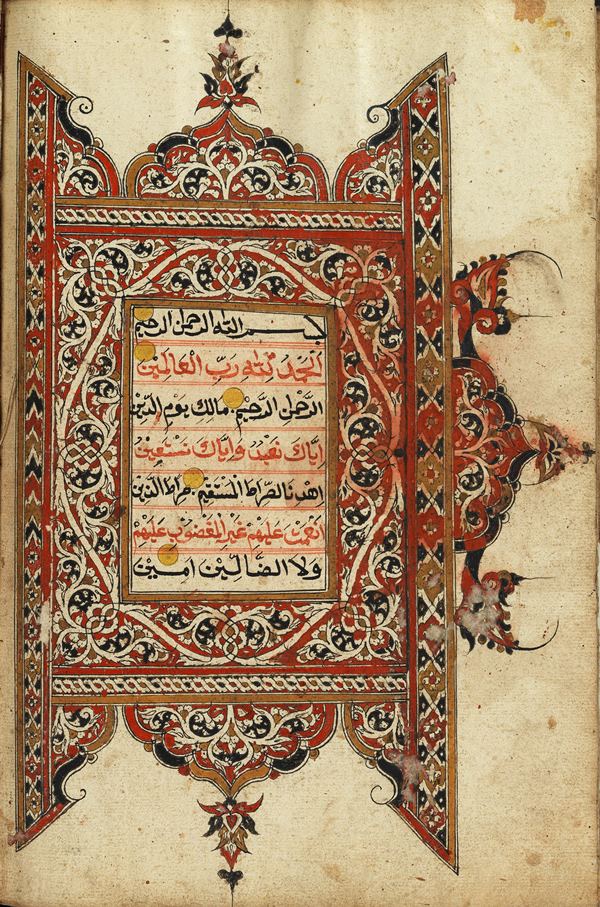 Opening page of an illuminated Quran from Acheh, Indonesia [UBL Or. 2064]