Newly found reports on the case of the historically infamous Leiden poisoner known as Goeie Mie.

Recently, the UBL has acquired two notebooks with a special significance for the history of the University and city of Leiden. These folio-size notebooks contain transcriptions of research reports of toxicological research pro Justitia, carried out in Leiden by successive professors of Toxicology between 1883 and 1912 (BPL 3737). The first volume begins with a report which includes the research performed on the bodies of Maria Frankhuizen and her child Hendrik Frankhuizen, and on other objects belonging to the case of Maria van der Linden-Zwanenburg. The latter being none other than the historically infamous Leiden poisoner known as Goeie Mie (‘Kind Mia’). For years people assumed that these reports had gone lost together with the records of the Court of The Hague after the Allied bombing of the Bezuidenhout on March 3d 1945. But recently an original transcription was found at the Netherlands Forensic Institute, after which the notebooks were transferred to the UBL.

The assignment to conduct the said research was given to the first professor of Toxicology in Leiden, Eduard Alexander van der Burg, who was appointed in 1877. The research has been described in a typical nineteenth century thorough manner, transcribed by a clerk as the reports end with 'w.g. E.A. van der Burg’. The report on Maria Frankhuizen is followed by 17 other studies regarding Goeie Mie. Where in the past it was only possible to establish a poisoning based on the recognition of certain symptoms in a patient, thanks to the rise of analytical chemistry at the end of the nineteenth century it became possible to objectively determine the nature and amount of a poison. For this Van der Burg used equipment known as the modified Marsh apparatus. Therein arsenic is demonstrated as a mirror in a glass tube. Together with the reports this tube was presented to the court as evidence.

After the death of Van der Burg in 1890, his successors have registered their research pro Justitia in the same notebooks. Advances in technology and methods of reporting between 1883 and 1912 are therefore easy to observe. The first micrographs of crystals make their appearance; copying by hand was later facilitated by the use of carbon paper, and from 1911 the typewriter enters the scene. The reports end abruptly on June 29, 1912 with a declaration. It shows that the hourly rate of a professor in those days amounted to 3 guilders. Former professor of Toxicology Leopold van Itallie was to become Rector Magnificus in 1922.

Post by Frederik de Wolff, Emeritus Professor of Clinical and Forensic Toxicology, and associated to the Scaliger Institute of the UBL as a visiting scholar. 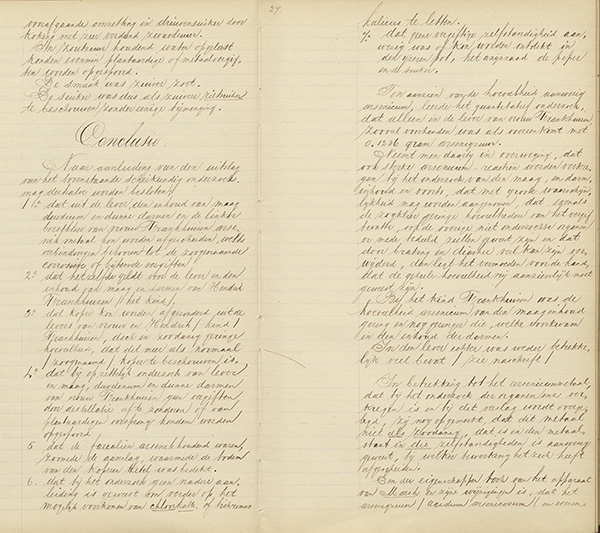