William of Orange welcomed in Brussels as a liberator

On September 24th, 1577, church bells rung for the father of the fatherland. The rejoicing was general, people were sweeping the tears from their eyes. Alas, two years later, the unity of the Netherlands had already been undone.

On September 24th, 1577, the people of Brussels welcomed the prince of Orange as a liberator and father of the fatherland. During five years the prince, united with Holland and Seeland, had proved able to resist the Spanish troops. The relief of Leiden in 1574 had also been a great personal victory to him. This moment he enjoyed an even greater triumph: now the people of the Southern Netherlands welcomed him as leader in the revolt against Spain as well. The English ambassador reported that the inhabitants of Brussels were even standing on rooftops and offered the prince an overwhelming reception. Church bells rung, the rejoicing was general, people were sweeping the tears from their eyes. Alas, two years later, the unity of the Netherlands had already been undone. On the one hand because of the internal dissension in the Netherlands proper. On the other hand because king Philip II opposed to the prince of Orange a tremendous adversary: Alexander Farnese, prince of Parma.

That made it even more important to publish a book on the glorious entry of the prince of Orange. The author was Jan Baptist Houwaert, a poet and rhetorician from Brussels. He was charged to organize the different theater scenes offered to the prince of Orange in Brussels: for instance that of David and Goliath, in which David represents the prince and Goliath the king of Spain. Another scene shows William of Orange as the Greek hero Perseus. He rushes on horseback towards Andromeda, who embodies the Low Countries, to liberate here from the monster threatening her: the tyranny of Spain. These scenes were immortalized in woodcuts by Antoon van Leest. The book was printed by Plantin in Antwerp in 500 copies. Of those 500, there are three copies in public institutions in the Netherlands and two in public institutions in Belgium. Leiden University Library is proud to possess this copy, which came into the possession of the library only in 1918. The Vlaams-Nederlandse Vereniging voor Nieuwe Geschiedenis (Flemish-Dutch association for early modern history) organizes a congress in Maastricht to the phenomenon of official entries: Propaganda and show: entries and festivities in the early modern period. 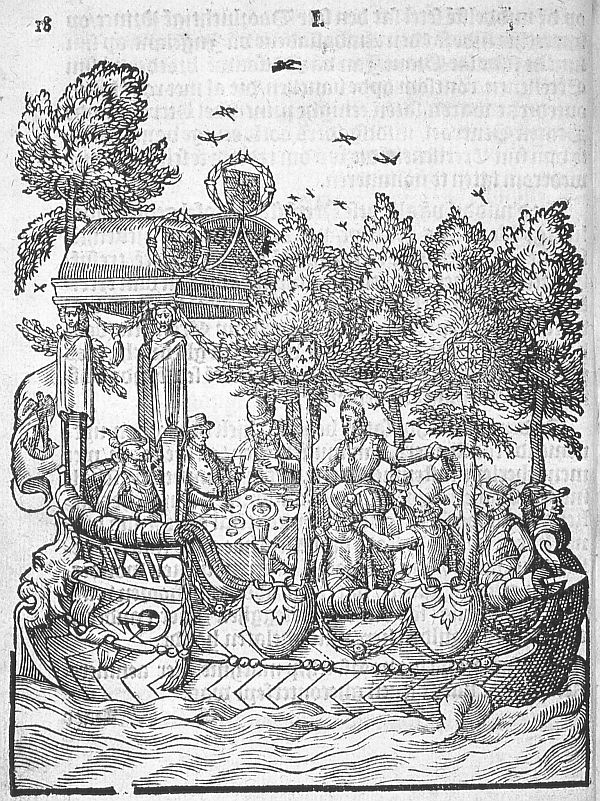